‘I feel less stuffed after dinners – and less guilty’: why I stopped eating meat

“My journey towards vegetarianism started 30 years ago for practical reasons, but the more I eschew animal products the better I feel about everything,” writes Michele Hanson in The Guardian on January 1, 2018. 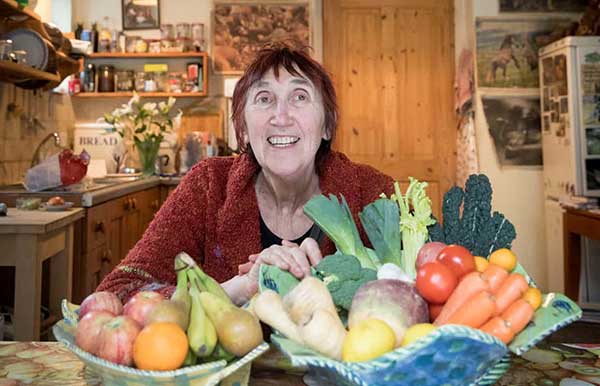 ‘The more you learn about meat-eating and farming, the easier it should be to give up’ … Michele Hanson. Photograph: Alicia Canter for the Guardian

My experience of giving up meat has been a gradual process, starting about 30 years ago, when a vegetarian friend and her two little boys came to live with me and my daughter. For practical reasons, we ate less meat. Why bother to cook two dinners when you need only cook one? Anyway, we all loved macaroni cheese and baked potatoes, and the odd tuna bake, because fish seemed sort of halfway and my friend wasn’t a strict enforcer.

Back then, meat still featured heavily when my parents visited. After all, I did love meat. I had been brought up on it and my mother was a superb cook. Her stews and casseroles, oxtail and neck of lamb; her roasts, turkey stuffing and chicken liver paté; her chicken soup and salt beef were delicious beyond words. There was something about meat-eating that my father found admirable, too, especially in boys. He once sat at the table with the children, watching my friend’s three-year-old son eat a large sausage. “Look at that!” he said with pride and joy. “What a good boy!” He failed to comment on my daughter’s equally impressive sausage-eating.

But my friend’s vegetarianism started me thinking. The only other serious vegetarian I had known was at school in the 50s and she had bad acne and funny-smelling breath, which put me off. Here was someone with clear skin, odour-free, robust, amusing, charming – nothing like the mimsy, pallid, socks-sandals and bobble-hatted vegetarians of my earlier, ill-informed imagination. She didn’t like eating meat, but she also had good reasons for not doing so – some personal, but most ethical. So, I began to eat less. I knew already about the cruelty of veal and foie gras production, so I never ate them. I knew pink meats – salamis and bacon – were carcinogenic. Now I found out much more.

Years later, my mother moved in. By then, red meat was bad for her and her false choppers made it impossible to chew anyway, so we were down to chicken and fish. Then along came the internet, Facebook and Twitter, with an avalanche of horror stories about intensive meat production: vast farms crammed with mutilated pigs, tormented cows, lambs and their mothers, chickens flung about and trampled, cruel and brutal abattoirs, the horse and dog meat trade, overuse of antibiotics, our resulting poor health and the wrecking of the planet. This torrent of grisly information made eating meat seem completely potty. The more you learn about meat-eating and farming, the easier it should be to give up. A teacher of animal husbandry tells me that, every year, by the time her students have seen lambing, the incubating and hatching of eggs and an animal’s complete life cycle, one-third of them have given up eating meat.

But even with all my nasty new knowledge I still found it difficult. Most of all, despite it potentially causing cancer, I missed lovely, crunchy bacon. I tried soya bacon granules, but they didn’t work for me. I missed the texture of meat – something to chew. So, we still had turkey for Christmas and occasionally I ate meat when visiting friends, because they had cooked it. I pretended I was being polite, but really it just gave me an excuse to eat it again.

Unsurprisingly, a friend called me hypocritical when I ate her free-range roast chicken while whingeing about being a “vegetarian”; she pointed out that I fed my dogs meat, particularly chicken. My argument was that you can’t have a vegetarian dog. I knew some people who did and the poor thing had non-stop squitters, which didn’t seem fair.

Then, two years ago, I had a breakthrough. I kept eating fish and shellfish, but there was no turkey at Christmas. We had nut roast instead – and delicious it was, too – with all the trimmings, which are just as, if not more, tasty than turkey and less of a palaver to cook. Heaven knows why I had clung to this pointless tradition for so long. Now I felt that, at last, I was giving up meat properly and not being so feeble. I am sure my digestive system has improved as a result, I am far less bad-tempered and I feel less stuffed up and knackered after dinners – and less guilty.

I have found that it is easier for a meat lover to give it up if you don’t dwell on what you are missing, but think of all the delicious alternatives. It might also help not to ban meat absolutely from your diet for ever. There is nothing like something being strictly forbidden to make you want it more. You can relapse. Sometimes, in a restaurant, I have been desperate for liver and onions with mashed potatoes and I have eaten it a couple of times over the past few years. I am not proud of myself, but at least I eat much, much less meat than I used to. Hardly a scrap.

It is now a comparative breeze to give up meat. We all know animals are sentient. There is not half as much sneering at vegetarians as there used to be. Famous, admired, personable and muscular vegetarians and sportspeople abound; the availability, variety and quality of vegetarian food has increased enormously. Decades ago, an English salad was lettuce, cucumber and tomatoes with Heinz mayonnaise; we had never seen an avocado. Now we have olive oil and countless varieties of delicious dressings and vegetables from everywhere on earth.

Our current favourite salads are: aubergine roasted in za’atar, olive and sunflower oil, salt, lots of pepper, with raw cherry tomatoes and mozzarella; grated celeriac and carrot, oil and cider vinegar, garlic, mustard and chopped tarragon; oranges with fennel; and mixed green leaves with sprinklings of toasted sunflower and sesame seeds or chopped and roasted almonds. And, since it is winter, there are a squillion soups you can make with vegetables, adding beans for protein (forget Blazing Saddles). Try a soup with haricot beans, celeriac, tomatoes, onions, garlic, parsley, rosemary and thyme, with some olive oil and lemon juice added at the end.

Before I even start on all the complex mixtures with sprinklings, there are 101 things you can do with my own favourite vegetable, the potato: bake, roast, rosti, latkes, layered and baked with cream, colcannon, bubble and squeak and, of course, chips. I make them from red potatoes; I don’t want to brag, but they are exquisite.

I haven’t found many prepared vegetarian products that I am wild about, but you can make a passable bolognese with Quorn mince and some people can do wonders with tofu. Try it rolled in cornflower, salt and loads of pepper and deep fried. I have found a pleasant, chewy mozzarella veggie burger, plus vegetable pies, quiches and pizzas. A local burger bar serves divine portobello mushroom burgers, which are tastier than the meat burger. Honestly. A friend tested them both.

I miss meat less and less, because I still have fish (often fried with the chips). But once you are on this path, where do you stop? I feel I ought to take the next step, of giving up the fish and shellfish, which I also love. Last year, in the fish shop, I saw a man holding up two live lobsters, asking how soon he should boil them; could he keep them alive in water for a bit? There they were, waving their arms in the air, distressed, I assumed. So, no more lobster for me. I have learned that octopuses, the stars of Blue Planet II, are very intelligent and “may be able to see with their skin”, so no more of them, either. Veganism is probably the end of this road, but I don’t know whether I will make it.

Meanwhile, that three-year-old boy who ate the sausage never ate meat again. Those are his salad recipes above and he is now a strapping fellow. My daughter has given up meat and is considering veganism, along with increasing numbers of people. There were 542,000 vegans in the UK in May 2016, up from 150,000 10 years before (a 360% rise). Almost half of them are young, aged 15 to 34. On top of this, there are about 1.2 million vegetarians (1.8% of the UK population).

So, I am really just going with the flow and hoping that the tide becomes stronger. In the first six months of 2017, 28% of Britons cut down on meat – a sensible move, seeing as it increases your risk of obesity, cancer, heart disease, osteoporosis, type 2 diabetes, food poisoning (particularly from chicken) and premature death. Although the world will never stop eating meat, perhaps more of us could, at least, stop eating such huge amounts of it. Then we could all have longer, healthier, happier lives. I have just got to sort out the dog’s dinners.

Vegetarianism is a byproduct of meditation