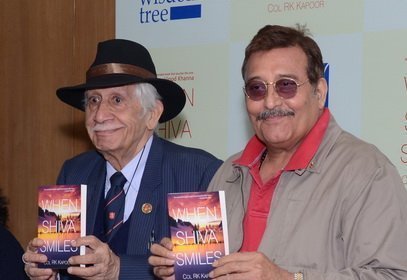 Raj Bharti, mostly known as Col. Kapoor to all, served over 20 years in the army and rose up to the rank of a Colonel. He retired from the army after becoming a disciple of Osho and moved to Mumbai to work in films.

He was a character actor (taking up at first small roles in films like ‘Dostana’, ‘Angoor’ and ‘Lakhon Ki Baat’, then many full-length and commercials), director, poet, calligrapher and humorist who had also published a novel, ‘When Shiva Smiles’.

As a director he spotted Shah Rukh Khan, and signed him up to play the lead in the TV serial ‘Fauji’ on Doordarshan in 1988, and gave him so the first break of his career.

Raj Bharti died age 87 and was cremated on Thursday in Delhi.

Osho answers a question by Raj Bharti:
That which is left is the real you

In this video he talks about Vinod Khanna (part 1):

Related article
‘When Shiva Smiles’ – Launch of the book by Raj Bharti (aka Col. R.K.Kapoor) in New Delhi, India, 2013

You can leave a message / tribute / anecdote using our contact form (pls add ‘Col. Raj Kapoor’ in the subject field).

Dearest Raj… you were one of the most important people in my earliest Poona days in 1974. You welcomed me and loved me like I was a favourite niece. I felt so welcomed even in my strangeness and skinniness – I had anorexia then. You brought two big boxes of groceries when Sarita and I moved into our flat in Boat Club Road. I loved the visits to your family in the army base, the warmth and great food.

Later, in early Poona 2, you generously offered that I could choose books at Manney’s Bookstore on your tab. I don’t know why you did that… but a greed overtook me – greed was often overtaking me then – and I bought too many books; as if it was perversely mandatory for me to abuse that generosity… I still don’t know why. The account was cancelled, as so it should have been… You bought me a sari too, I don’t know why… I didn’t know what to do with that much love. I have felt bad about this ever since… I think I wrote you a letter apologizing when you were in Delhi. I didn’t hear back.

It is so touching to see the pix of you when you were old – I never saw you like that; only as a huge bluff booming guy – full of energy and heart.

Much much love to you on your journey…