After their visit to the Mogao Caves, Veena and Michael set out to discover the Singing Sands. Part 3 of 3 of this series. 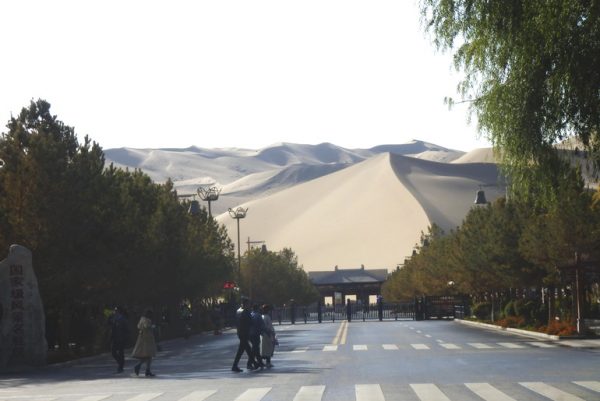 The Chinese give wonderfully imaginative names to natural phenomena and the place we were going to visit on the following day was rather romantically called: The Singing Sands.

On the edge of the town a cluster of sand dunes surround an oasis of water, shaped like a crescent moon. For over two thousand years this lake has never dried up nor changed its shape – until recently. Of course, modern life, an increasing population and land use have taken the expected toll, but fortunately measures were taken about thirty years ago to protect the oasis and, although diminished, it is still beautifully impressive.

We know the phrase shifting sands, and so it is uniquely unusual for dunes to stay the same shape and for the oasis not to disappear over time. Scientific research has concluded that, because the Mingsha Mountain ranges on the southern and northern sides of the crescent lake are much higher than the mountains on the eastern and western sides, the winds blow the sand in a certain way which prevent the sand from covering the lake and also prevent the sand dunes from radically changing shape. Nature is amazing.

After a relatively later baozi breakfast, Michael and I joined the other tourists to explore these very striking natural wonders close to Dunhuang. The road actually just ended suddenly at the first looming sand dune, at the base of which a row of camels plodded along bearing their load of tourists. I know it was a tourist attraction but still there was something very picturesque and timeless seeing these animals, symbols of so many desert adventures, up close.

The immediate sand dune was pristine behind them but as we walked around its base, the next one was heavily indented with footprints – because of course, the next thing a tourist has to do is climb up the dune. This was a feat too far for me but Michael immediately started to climb. He was wearing his kungfu cloth shoes, so he had decided not to use the bright orange cloth boots given out free of charge to the tourists to prevent their own shoes being filled with the very soft, fine sand.

I set off for the crescent lake which had been one of my dreams to see. It truly did not disappoint. It is hard to explain… All one can see is yellow sand and blue sky and then suddenly, in the middle of it all, is this blue lake with an ancient temple beside it. Fortunately, there were not too many people around so I was able to get some unpopulated views – as it must have looked many hundreds of years ago.

I have long been fascinated with the history of the Silk Road and all that happened along its way, so I felt a tug of something very ancient when I stood silently and tried to absorb the scene. Again, I was aware of some magical soft energy hovering around the place despite some chattering tourists and wailing kids behind me.

There was a path between the lake and the temple which I followed and found a good-sized tree under which a gnarled wooden bench had been placed. Perfect to sit on and contemplate, and wait for Michael. Reading the ever-present information boards in appalling English, this is apparently a very unique tree which can exist in extremely arid conditions. I learned also why the sands sing. It seems that the sand grains here have a certain physical formation which make sounds like singing or sighing when moved and rubbed against each other by winds or footsteps. Michael said he could distinctly hear the sounds when he climbed over the first dune and up the next one where there were no people.

Eventually Michael appeared at the top of the first dune and made his way downhill, half walking, half sliding. He was beyond thrilled at the experience of surmounting the second dune – he said he felt like he was the only person on the planet – total silence, total nothingness.

Certainly, our trip here was one of infinitely unusual and otherworldly experiences.

Hunger was now an issue so we decided to return to the hostel, have a snack, and part company, me to have a nap and Michael to explore the town and shops. We planned to have a big meal in the Night Market as a farewell celebration because we were leaving the next day.

Unlike most men who abhor shopping, Michael was a shopping buff, so we made our way to the food via the souvenir stalls to buy presents to take back for friends. Dengfeng, our home on Song Mountain, is a desolate shopping area with a total lack of anything attractive to buy. Dunhuang, on the other hand was an absolute treasure trove of delightful curios – many hand-crafted ones – artistic, colourful, original and cheap.

I bought three shawls as presents – fake cashmere, but still gorgeous and fell totally in love with the woman serving me. She was a buddhess! So beautiful in her quiet, smiling, caring simplicity. She somehow embodied the qualities of all the local people we had met. Never in all my travels around the planet have I felt all the people surrounding me to be so open, so peaceful, so loving, so joyous.

We had earlier eaten at the delightful Buddhist vegetarian restaurant, but this time we chose the Night Market simply because it was so much fun! I mean, if you could order a Banquet in Silver Paper, or Glutinous Rice Soup, or Haggis, or Spirit Immortal Gruel … why wouldn’t you? Again, the locals were fascinated with a westerner who could speak good Chinese and joke and play with them, so we were welcomed at whatever cooking stall we visited. They were, in turn, delighted to share their cuisine with us.

So a very good time was had by all.

On my journey home to Song Mountain, reflecting on all I and Michael had experienced, it seemed to me that, from the ten thousand buddhas in the nearby Mogao Caves, a mantle of Buddhahood spreads softly over the town of Dunhuang and its people. It felt like we had entered a realm of beauty, grace and timelessness. Is it possibly this state of consciousness to which Osho was pointing us with his so often repeated phrase?

Veena is the author of a trilogy of books about her path to and with Osho. 3booksblog.wordpress.com

How do you measure the length of a man’s life?