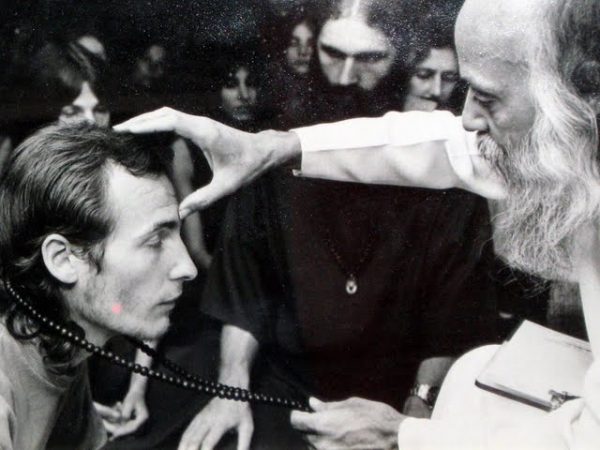 Swami Hans-Wolfgang (aka Hans-Wolfgang Reichold, HaWo) took sannyas on 4 March 1980 in Pune. Three months before his dissolving he changed his name to HaWo. He said his energy had changed. This was the time when his cancer had made him lose weight. Nobody knew he had cancer; he kept living his life as if nothing had happened to his body.

He was born in Nürnberg and grew up with two brothers in a teacher’s family. He studied theology and was a certified pedagogue. He loved books. Every day he walked for a few hours and while walking he always read a book. He could walk and read at the same time. And he loved SpongeBob. 🙂

In his small flat he collected almost every Osho book that existed, as well as other books on various spiritual traditions, psychology, children’s books, rebellious books…

HaWo lived a simple life. Not many people will know him, yet he had a great impact on the friends and people he came across, like on his fellow travellers Pakhi and Samarpan. We twins got to know him in 1970. Pakhi became his beloved. And I got from him a hint which gave my life a clear direction. In the 80s he said to me, “If Jesus were alive, would you go and visit him?” “Yes, of course,” I said. “So go,” he said, “you will find him in Pune.” And I went.

HaWo left his body in my presence, my fellow traveller and long-life beloved. He did not leave, he just stopped breathing. After that his silence became deeper and deeper until he dissolved a few hours later. Time to celebrate!

HaWo became a sannyasin, but he had been rebellious before. Yet from then on he became truly rebellious: he became an ordinary man. “Easy is right” had been his path, which he followed without compromises. He was a man of Tao and loved Chuangtzi. Osho and Chuangtzi were his masters…

Samarpan speaks in this video on his dissolving process (in German). More photos and quotes by Osho on www.findyournose.com

There was a virtual gathering on 4 October 2020.

You can leave a message / tribute / anecdote using our contact form or by writing to web@oshonews.com (pls add ‘HaWo’ in the subject field).