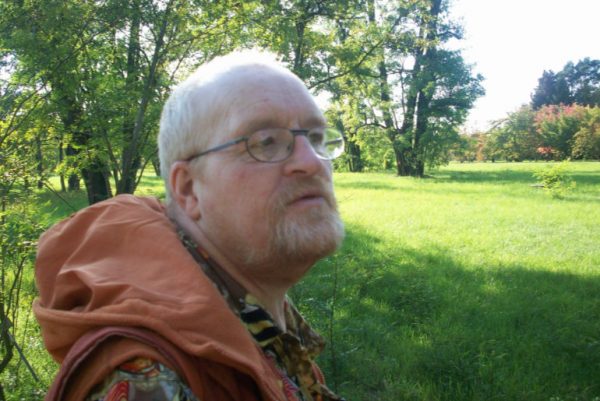 Swami Gyan Mandiro left his body on Saturday, 16 April 2022 in Berlin, Germany, in the early hours of the morning. In March, he had been diagnosed with a cancerous inoperable tumour.

In December 1978, Mandiro received sannyas from Osho in Pune. Mandiro was a member of the Vihan Meditation Center on Urbanstrasse in Berlin from 1980 onwards, working with Sneha, Bhagawati, and Geetam at the time. Together with many other sannyasins, the Osho Commune in Berlin, the Far Out Disco, the restaurant, and the meditation center on Kurfürstendamm were created.

In 1983, the Berlin sannyasins moved into a freshly renovated Art Nouveau house in a side street off Kurfürstendamm, Dahlmannstraße 9. From there, all sannyas establishments were within walking distance. For many years he was responsible for the commune’s bookkeeping. Mandiro moved later to Medina in England, and then to the ranch in Oregon. Mandiro loved commune life with all its activities, yet at the same time, he missed his Berlin sannyasin friends and the vibrant Dahlmannstrasse scene.

After the dissolution of the commune in Oregon, and wandering around for a long time, he moved back to the still-existing commune on Dahlmannstrasse, and once again became member and part of the community. He lived there until 1996, carrying out many activities for the commune, such as disco shifts, cleaning, etc. He also visited the ashram in Pune several times and did a training with Prashantam in Divine Healing, as well as a 6-week Zen retreat there.

He moved into a one-room apartment after leaving the Berlin commune and participated in numerous job opportunities from the job center. He maintained his friendships on social networks, while personal contacts were equally important to him. He enjoyed going on nature bike trips and getting together with friends for coffee and ice cream.

Whenever possible, he also enjoyed travelling and visiting friends all over Europe. In recent years he had been looking for a place in a community again. Mandiro was always very helpful and caring with his friends and had a good connection to children and animals, and was well versed in plants.

About ten years ago he was diagnosed with rheumatism and treated for it. It is possible that the drugs triggered the cancer and maybe also made him very forgetful; surely some of his contacts on Facebook noticed that.

A move to an assisted living facility was pending, but unfortunately the cancer diagnosis intervened at the beginning of March and then everything unfolded very quickly. He immediately accepted his diagnosis and chose the easiest way for himself: fasting, which he had been practicing for decades. At first he stayed at a hospital but was then moved for another three weeks into a hospice.

It was a move without any attachments, and dressed in his robe and wearing the mala he left very peacefully on the Full Moon in Libra (he was a Sun Libra). Mandiro was surrounded by good friends who cared for him with affection and love.

Harimurti, Anutosha, Yogendra, Rolf, Bettina, Alvina, and Shantam Karen deserve a very special thanks. Several other friends also supported him in the background.

You can leave a message / tribute / anecdote by writing to web@oshonews.com (pls add ‘Mandiro’ in the subject field).

so sorry to hear that you left this plane, and that our meeting didn´t happen anymore.
I will be always grateful for your caring when I had hepatitis in Poona 1 and our times hanging out together with Mudito, Nadam and the rest of the old gang.
I believe we had a ‘Tibetan’ connectiion sharing a love for Anagarika Govindas’ “Way of the white cloud“ and meeting at an retreat with Chimed Rigdzin Rinpoche more then 20 years later.
I pray that you go to the best place possible for you and send you Tibetan Mantras!

Love, peace and all the best

Lovely pictures my old friend Mandiro sent me years ago. We were both in the Divine Healing Arts training in Poona, in 1988-89. We actually didn’t meet again after that but stayed friends and pen pals for years sharing postcards and I received more than once exotic flower seeds to plant. A dear and caring friend!
Sorry to hear of your leaving this earth!
Love and blessings for your journey.
Deva Vinod

The future is in danger

In Celebration of Osho Leela: A Diamond in the UK