A Visit from the East

I was recently discussing climate change with my brother and suddenly started telling him about the mysterious visit of an enlightened Japanese woman to Osho in Poona in 1989 and my subsequent visits to her in her beautiful little temple in Enoshima, near Kamakura, where I lived for 5 years. He was uncharacteristically silent when I finished and then said, ‘You must write that down. It is such a beautiful story, it should not be lost!’

So, here is the story…

We were sewing peacefully in the sewing room in Lao Tzu House when there was a call for Japanese Geeta to come immediately to Neelam’s office. Someone had arrived and her translating help was need.

On her return, Geeta told us that an old Japanese lady called Tamo-San, a priestess from a temple near Kamakura, south of Tokyo, had arrived with three disciples. She had explained that she had come to visit Osho to give all her energy to him as he could reach people worldwide in a way that she could not. We were awed to hear this amazing story and were very curious to see how Osho would respond.

In Buddha Hall that evening, waiting for Osho to arrive, I could see the exquisite tiny lady sitting in the front row with her disciples. She seemed so light and so full of light and so very still. After Osho had greeted us he walked to the edge of the podium and gestured to Tamo-San to come close. She gracefully got up and stood smiling up at him. Anando quietly stood up too and I could see she was holding a beautifully decorated brass bowl.

Osho took the bowl from Anando, picked up a handful of the rose petals it contained, and gently showered Tamo-San with the petals. He then namasted to her, she bowed in the Japanese way to him, and they both returned to their seats.

I was transfixed. What was I witnessing? There seemed to be a transmission without words, a conveying of knowing and understanding – and an exchange of infinite love.

Tamo-San left the next day without saying a word of what had transpired.

I never forgot the wonder of that moment and when I went to Japan a few years later and heard that Tamo-San was living in a small temple in a nearby village, I of course went to see her. Three western sannyasins who were also living in Kamakura – we were all teaching English – came with me.

It was a wintery afternoon when we arrived at the beautiful, old, thatched building set in a Japanese garden. The entrance was in the traditional style: one took off one’s shoes on one level and then stepped up to another level which was covered in tatami mats and slipped one’s feet into the slippers offered to guests. We were then welcomed by Tamo-San’s daughter who spoke quite good English.

First we went into the temple where people were meditating. A faint fragrance of Japanese incense hung in the air and Tamo-San was – it is hard to explain – kind of singing a chant, creating sounds unfamiliar to my western ears. She was, apparently, famous for this kind of chanting. Sitting there I felt the same kind of energy that I had felt when sitting with Osho –although it was lighter and softer, maybe because she was a woman and older.

After the short ceremony, Tamo-San got up and welcomed us by giving us all an incredibly strong hug, surprising for its strength considering her size and age. This, we learnt later, was how she transmitted energy to people, as well as with her singing.

She gave us water to drink which, she told us, came from a sacred well in the temple grounds and contained healing properties. She then took us into her inner sanctuary to show us her shrine. In the centre was a statue of Buddha. On his left was a Christian crucifix and on his right was a picture of Osho. She touched each one gently and told us that these were the three most important beings the world had ever known and that she meditated on them every day.

I was stunned. I felt I was getting a tiny glimpse of a great mystery – particularly where Osho was concerned. How was this eight-five year old lady, who spoke no English and who lived in comparative isolation in a tiny village in Japan, so clear and sure about Osho’s importance in this world, equating him with Buddha and Christ? And what existential force or knowledge directed her to leave her sanctuary, get on a plane and go to Poona to see Osho for an evening and then leave? It was a huge journey for such a frail old lady. This was all far beyond my understanding.

We also learnt something quite unexpected. It seemed that after getting a university degree in ecology, Tamo-San had spent much of her life campaigning tirelessly in Japan and many other countries for people and their leaders to wake up and do something about the damage we were causing to the environment. We were shown some albums of photos and newspaper clippings of her as a young woman leading rallies to raise awareness about saving the planet. She had also written a small book, the title of which, translated into English, was ‘Stop the Boat!’ On the cover there was a sketch of people in a boat sailing towards a weir. The people in the boat were facing the other way, unaware that disaster was only a few minutes away.

Then the daughter, who did not seem to share Tamo-San’s love for Osho and was rather abrupt with us, made it clear that she felt we had had enough attention and should now leave. Tamo-San, however, had other ideas and created considerable consternation when she told her disciples that she wanted us all to stay for dinner. Not only that, she wanted to make us a treat called mulchi, which is a Japanese sweet tasting rather strange but quite delicious.

I can’t find the words to express how incredibly sweet Tamo-San was – playful, childlike, delicate, gentle – but incredibly strong. She delighted in cooking for us and watching us eat the food she prepared for us.

Then it really was time to go so once more she gave each one of us her incredible hug and we were ushered to the front entrance where we took off the slippers and stepped down onto the ground to put on our shoes. Our state of gentle bliss was further increased by the sight of snowflakes silently falling. We gazed in awe at the now altered garden and trees, all powdered with glistening new snow.

Then there was a call. We turned back to look at the entrance and Tamo-San was there, gesturing us to wait. She then disappeared and we stood for a while in the falling snow. We heard her softly singing before she re-appeared in the entrance – as if on a stage – and proceeded to dance a delicate stately dance for us, accompanying herself with her own song. She ended by kneeling down and bowing to us, then got up and waved as she floated back into the house.

Needless to say we were all in tears at the incredible beauty and energy we had just been part of. We, too, floated back home.

Veena is the author of a trilogy of books about her path to and with Osho. 3booksblog.com – facebook.com – gulunkungfu.com

Archan Sukhita: The Bold One

Looking at the sky 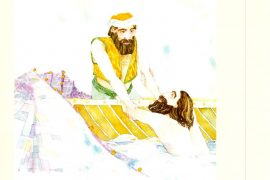 A Master is a reflection of Khidr