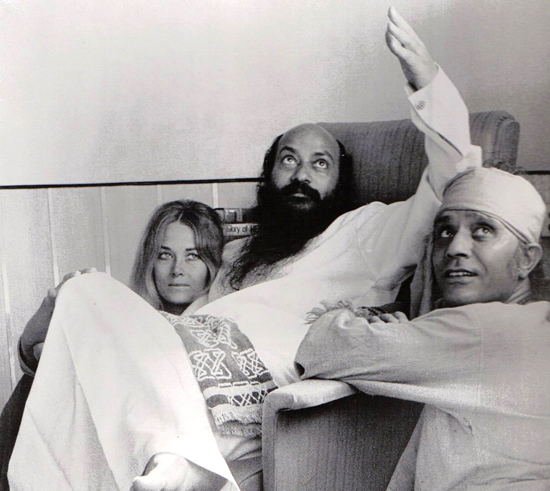 One late afternoon Priya, who usually helped in the kitchen, appeared silently next to my sewing table and told me to go home, have a shower and be ready in the library in fifteen minutes, and to bring a tape measure with me. Wow! This was a new one. A little nervous, I did as instructed and finally Nirvano appeared in the door of the library and beckoned me to come with her. I followed her to the doors leading to Osho’s and her rooms. Osho and Nirvano each had a room, balcony and bathroom connected by a passage, the door of which was guarded twenty four hours around the clock by a ‘samurai’ (sannyasins whose training in martial arts was part of their path).

I started to tremble as she lead the way to Osho’s room, opened the door and gestured to me to enter, again one of those devilish grins flitting lightly across her face.

The shock was enormous. Firstly I was almost knocked flat by the wave of energy hitting me – I know my knees buckled. I had already had many experiences of the energy field surrounding an enlightened master, but never as concentrated as this. With nowhere to be dissipated, the energy just builds up inside the room and to someone not used to such a force, the impact is enormous.

I knew enough of Osho’s routine to know this was his bath-time before his mealtime and the evening darshan, and I could hear him splashing about in the bath. Astha was doing a quick clean and Nirvano, while talking to me, was idly picking up and folding the newspaper which was scattered all over the floor. Some pens and some paper were on a little table next to his chair and all of a sudden I was flooded with an existential experience of enormous ordinariness. In his discourses Osho had often said he was just an ordinary man, but there was no way I could conceive of this. To me he was the most extraordinary being on the planet, how could he be ordinary? Yet, here I was experiencing just such a state. I felt almost faint with the impact.

Nirvano sat waiting patiently, understanding, I knew, exactly what I was going through. She must have been through experiences like this many times. She gestured to me to sit down with her on the marble floor and, when I again managed to pull myself together, she pointed to the window behind me and asked me to take a look. I turned and saw a beautiful big picture window strung with some shabby beige curtains, hems uneven, seams frayed. Because Osho was allergic to such a huge amount of material the curtains were hung between two layers of glass, the inner layer in the form of sliding windows so someone could reach in and close and open the curtains. It wasn’t that easy to replace them.

‘Would you be able to make some new curtains?’ she asked. The familiar itch possessed my fingers. This had to change! I of course said yes, although I had never had to curtain a window with such a large expanse before. She was happy at my reply and asked me to take some measurements and do it as soon as possible. Robe-making was to be suspended until the project was finished.

When I left the room I was so overwhelmed that I knew I would not be able to work anymore so I went back to my room and just lay on my bed. Waves of energy flooded over and through me and all the time I was experiencing this sense of ‘ordinariness’. I think this was one of the most transforming experiences of my life as a sannyasin and somehow I then understood what he meant by ‘ordinariness’ and how a person is never ordinary until the ego goes, because the ego strives perpetually to be extraordinary. It thus was easier to recognise the many times my ego reared its indefatigable head when I felt proud of something I had done or offended at criticisms. Each infinitesimal growth of awareness meant a consequent infinitesimal disappearance of the ego: one further tiny step along the way.

This is an excerpt from ‘Glimpses of My Master’, the second in Veena’s trilogy. It is a compilation of many of the pieces she has written about Osho over the years with new chapters such as one on ‘Kailash’, a little known episode in sannyas history. Texts of ‘Meeting the Master’ and ‘A Seam for the Master’ are included.

Veena is the author of a trilogy of books about her path to and with Osho: 3booksblog.wordpress.com – facebook.com/booksbyveena

What you say has made me very happy

You long for the peace I have within me

I am against the dead ruling the living