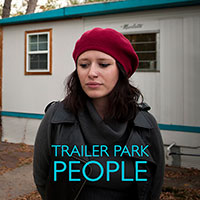 I had no idea what to expect from this flat square book that came dressed in cardboard through my mail slot and landed on the mat with a plop. From our creative sannyasin free-for-all, anything could arise. And quite rightly.

So, I undressed it and sat with it on my lap, and felt the pleasing squareness of it; and gazed at its cover – this strange visitor from another continent, a place I have eschewed. What am I going to find?

First of all, the sense that there will be images here and not so many words. This is agreeable, for words insist on knowing something, whereas images just are, and so offer much more spaciousness to the explorer. And I know that those images and all that space will call up in me…words! What fun!

The cover picture is, as it turns out, intentionally misleading. It’s Sundro’s idea of being tongue-in-cheek. (The title matches it for trying to lead you off in the wrong direction.) We see a young Hispanic beauty with a ring in her nostril, a red beret on her head, and a black jacket on, (later Sundro tells me she is German!) standing in front of a typical mobile-home wall, with its feel of insubstantial ticky-tack and flimsy window-framing. Only if you peer up into the left-hand corner of the frame do you see that there are, out-of-focus, tree-trunks and leaves up there.

The girl’s dark eyes are downcast, her full mouth uncertain. She looks like the inmate of some teen remedial home. On the front of her dark clothing are big, frank words in aqua-blue: TRAILER PARK PEOPLE.

If you turn the book over and examine the back, there is a huge healthy spruce tree, and some text:

Impressions from a mobile home park
situated in the heart of
Boulder, Colorado.
Is the living easy?
Find out from some of the people who call it home.

So I turned the book over and dipped further in, behind the cover, to see what’s what.

There’s an introduction, telling us that the American cultural stereotype of trailers being low class, down-market dwellings is here stood on its ear, because at this particular trailer park eco-conscious people are thriving in small spaces, spending less, and enjoying more.

For the States, this is a revolution. The States hasn’t got an energetic support for “just enjoying being where you are without needing to constantly make more money to keep from falling in a terrible hole.” For most people, a trailer park is a terrible hole – “trailer trash“ says it all – full of sloppy, miserable people, down on their luck.

I have seen trailers that were proud of themselves – in Missouri, in Sedona – with gardens and built-ons – but still, if you spend time in such a home you can’t help but notice the plastic door-jambs, thin walls, plastic carpeting. With just a bit of ill-treatment, such a dwelling gets ghetto-ugly very fast – stove-in walls, melted areas on kitchen countertop, grime built up in the fibreglass shower. To make things worse, I’d read that after Hurricane Katrina nearly destroyed New Orleans the government sent a huge number of new trailers to house the dispossessed, and a year later those people were ill – coughing, dizzy, exhausted. Tests were done and it was discovered that the level of formaldehyde in the air inside the trailers was eight times the toxic limit.

But I’m assuming that the trailers in Sundro’s park are old and have done their off-gassing long ago. And indeed, Sundro confirms this.

In the Tornado Belt, through the Midwest, there’s a running joke that trailer parks are tornado magnets. So although there are tidy parks housing retirees, in places like Florida, basically the whole concept has gotten very bad press. It’s hard to find a detective novel in America without a trailer park in it, a catchment for doom, gloom, and domestic abuse. Just goes with the territory. 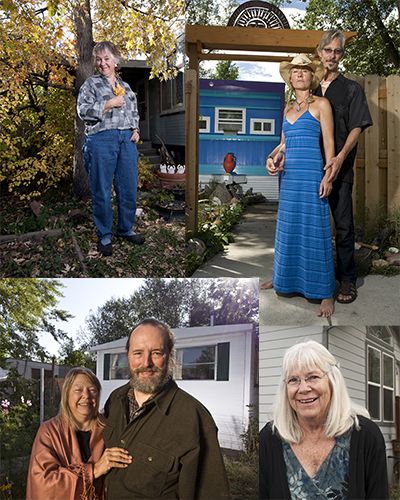 Now I turn the page and enter the book proper.

First: Sundro is a wonderful photographer. His portraits are frank, straight-on, balanced, loving. One feels he is enjoying, caressing, the outside of the person – her presentation, her braids and piercings, his easy vertical slouch – whilst also looking deeper and gazing calmly, friendlily, on the Inner Treasure; with no need to invade. Each portrait has a few paragraphs of text on the facing page, telling that person’s story in very short form, and their own take on living in a trailer park; that particular trailer park.

This is, quite simply, a book of portraits.

I am sure Sundro could do portraits in any milieu and they would be marvellous. But in this context the portraits have a unifying theme or vibe: this one place, a place I have never been; yet I am to ‘get’ something about it here. And this is done through letting me see all these particularities, held in this same air.

Residents are identified by initials only. There’s a tall, slim, blond-and-grey couple – she in blue dress and cowboyish hat, he in dark loose clothing and shades – standing in front of their own hand-hewn gate, in the shade of trees; blue trailer in the background. They are F & S, he from Australia, she American. S says, “…I met F when I moved to Boulder. When I first saw F’s place, I was shocked. I thought, F lives here? Despite my problems with the way the trailer looked, my body was very relaxed. It was very still here, with a lot of trees.

“Four months later, we got married in the trailer. I was living in an apartment up on Pine St before the marriage, but I was more at home in this funny little trailer…”

A Hispanic family, 40-ish parents, teenage daughter, two small children – say, “We’ve lived here 10 or 11 years. We like living here. It’s very calm. There’s no violence or crime. There are nice people here; we have good friendships with the neighbors…”

A pretty, smiling, honey-haired woman, K, in a garnet evening dress and elbow-length gloves, stands with hands on hips before her white trailer, backed by great trees. She says, “This park is a little gem inside of a very expensive town. There’s a great opportunity to take this little box you live in and create something special. It’s really cool what people have done with their homes. I like the simplicity aspect of living in a small space, too. I don’t have to be concerned about making a ton of money. I can ride my bike downtown.

“In terms of people judging the park, I’ve noticed it’s not so much what they say, but the look on their face, like they’re trying to hide their reaction. Talking about living here begins to break down their stereotypes. I see people opening up more with the discussion. And I see it as an opportunity to let go of my own judgements about living in a mobile home park.”

The dark beauty on the cover, another K, who proves to have a cigarette in her hand, says, “…Nobody my age lives here. At 21, I’m the youngest person I’ve met here. A trailer park is a little too much like a community. There are so many laws I’ve got to follow. I’m not really good with the community thing…”

Osho’s Utopian idea (The Golden Future) is of small communities surrounded by forest. It looks like such a thing has naturally grown up here.

It is also, then, a book of trees – and the trees inform the portraits and bring calm and blessedness to them, as trees do; and the trees want their own portraits done, for they are beautiful and strong and benevolent. They are the grandfather-ancestors, protecting the frail human spirits that have washed up to their roots. But we barely see the trees; we just see their effects – and by their effect shall ye know them. These people have been allowed a breather from the earth’s great furnace of confusion; in the arms of these trees they rest easier, breathe better. I know it; for I have lived in a close-growing oak grove, and seen the power of its healing on the wild human soul which seems always lost in transit.

I asked why we don’t get to see the wonderful trees everyone speaks about and he sent me a link where you can see them; apparently formatting and budget constraints meant that most of the trees had to be cropped from the photos. Pity.

I also told Sundro I thought he should have put on the cover the happy lady in the evening gown, for example; but he said the grumpy young woman was an intentional choice: you might think that here was a normal trailer park, until you opened the book and saw all the smiling, calm, dignified people. (In fact, Sundro tells me several sannyasins live there and some are among those depicted; but I didn’t recognize any of them: Sundro and his son, Suman, Seemanta, Kabir, Vandana, Avani, Robert.)

I passed through Boulder in 1987 with Subuddha – my only visit – and remember a hilly, leafy, clapboard-house little town with sidewalks buckled up and cracked by tree-roots; and one huge health food store where everybody went. The Rockies loomed overhead. I’m guessing that 28 years has brought a god-awful amount of growth, soaring property prices, widened roads, shrunken lawns, strip malls, Taco Bell, banks, more goodies in the Whole Foods, and maybe a serial killer or two – the usual American mix. The little white frame house where I visited sannyasin friends is probably worth half a million now. So I can understand the joy of the denizens of the trailer park – they’ve gone backwards and achieved something old-fashioned, while maintaining the open minds and sensibilities of meditators – some of them – and of benign eccentrics – the rest. And this is an accomplishment, because America is a seducer, bit by bit prying you away from how you knew you wanted to live, insisting you jump through this hoop and that one; all in larger thrall to credit card companies, banks, and insurance companies, and so on – companies dedicated to keeping people in harness and producing for them. To simply hold your own in a nice little place with trees and friendly neighbors, most of whom don’t have guns, flags, or Jesus to throw at you (I assume) is enormously difficult.

I’m sure Osho knew we would seed the whole Earth. So, much as I wish we all lived closer together, I’ll have to concede that some people are bound to live in America. And if there, why not Boulder? Pretty and cool and spiced by the cosmic rays of tall mountains? And if in Boulder, why not in this park? A place where there’s a nice guy called Sundro who has such affection for where he finds himself, in the here and now, that he takes lots of pictures of it, and of his neighbors too? It’s almost Golden Future-ish. 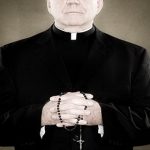 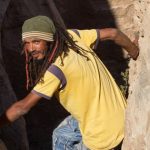 A Night in the Desert with a Stranger 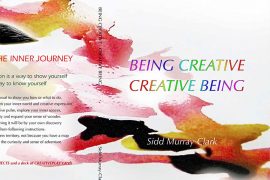 Being Creative · Creative Being: Painting the inner journey 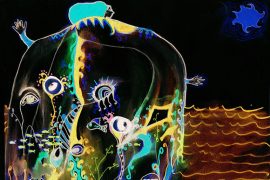 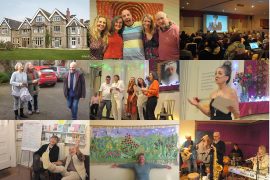 Adventure of the Heart: Winter Festival at Osho Leela