Legendary photographer Steve McCurry was in Kenya during January to shoot a campaign for famous fashion designer Valentino. Making this statement in New Delhi recently, he said he stayed in Amboseli National Park for the shoot with five models and a big backup team that turned it into a movie set.

Africa lived up to its reputation for the unexpected when a dust storm loomed up on the horizon just as he was starting to shoot on one day. As everyone wanted to pack up and call it a day, he told them to carry on and clicked some amazing photos. Asked if he had a great time with the models, he said although there were five of them, they were all very young teenagers with their mothers! 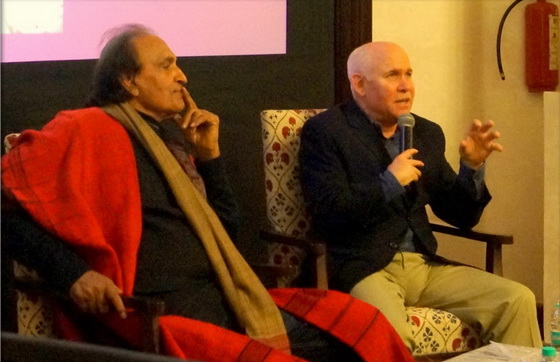 McCurry spoke in conversation with Raghu Rai, another legendary lensman, to a packed audience of avid photographers. After their dialogue, he answered many questions and they both launched McCurry’s coffee table photo book, India, published by Roli Books.

Asked what his most dangerous situation was, he recalled when he was involved in a plane crash in Serbia; as the plane went down in a lake, he was saved. While clicking photos, he had numerous hair-rising experiences and narrow saves in war zones of Afghanistan, Iran-Iraq, Cambodia, Gulf War, among other hot spots.

He is known round the world for his iconic photograph, ‘Afghan Girl’ in 1985. Asked about how he shot it, he revealed that it has no back story. He saw this orphan in a refugee camp in Peshawar, Pakistan, and clicked at the right second to capture the vacuum in her life. Front-paged on National Geographic (NatGeo), it has been used by Amnesty International and other media to become ‘the most recognized photo in the history of NatGeo’. The girl remained unknown until he went back with a NatGeo team 17 years later and located her; he clicked another portrait, this time giving her name, Sherba Gula.

Recalling his India connection, he said he saw photos of monsoon as a 16-year old and wanted to click similar pictures. When he came to India in 1962, he did some of his best work: India by Rail and Monsoon. He has a special fascination and is very close to Kolkata and would love to do another book on this city.

Talking about the changes on photography, he said that his assignments that used to be up to six months have shrunk to one or two weeks. Many top magazines for photos have closed down. Digital has overtaken analog photography; but digital provides worldwide exposure to every photographer.

McCurry has a strong bond with India. After all, it was in India that he clicked his best photos; and he dressed up as an Afghan, crossed over to Pakistan and Afghanistan to immortalize the refugee girl.

Related article
Click with your Heart, not your Brain

If People Are Blissful…

The scent of India

I am still surprised!