Mahendra continues his journey in Iran, this time not as a hiker but as an art lover.

After the mountain trip in Iran (see On Top of Iran: a Journey to the Alburz Mountains) I went on a one-week tour to see some of the famous Iranian cultural sites. They were an impressive evidence of the glorious and changeful past of Iran and of the amazing artwork that had been developed in this country. Starting from Teheran, I went to Kashan, Esfahan, Pasargad, Persepolis and Shiraz – from North to South.

I will present the sites in their historical order and provide a little background information:

The name Iran means ‘Land of the Aryans’.

People from the Eurasian steppes North of the Caspian Sea migrated between 2000 and 1000 BC to the Iranian highlands, calling themselves Aryans, which meant “noble ones” in their own language. These Aryans spoke a language, which nowadays is called PIE (Proto-Indo-European). Not much is known about them but their language is the ancestor of almost all European languages, the Persian languages and various North Indian languages.

For some thousands of years they had been living as hunter-gatherers or farmers in the central Asian plains before they started spreading in various directions.

While today the claims of the Nazis as being the Aryans’ main descendants can be discarded as wishful fantasies, there is proof of the Aryan roots in Iran. The Avesta, the oldest known Persian scripture, mentions them and on the inscription above the rock tomb at Naqsh-e Rostam (see slide show), King Darius I is described as “an Achæmenid, a Persian, son of a Persian, an Aryan, having Aryan lineage.”

The direct descendants of those Aryans, the Achæmenids, created a vast empire, lasting from about 550 to 330 BCE.

The Achæmenid Empire is widely regarded as the first world empire as it included most civilizations which existed in those days. It extended from Macedonia to India and from Sogdia (now Usbekistan) to Libya. Zoroastrianism was the main religion.

The early capital of the empire was Pasargadae, where the first kings, Cyrus and Cambyses II, had palaces and were later buried there (pic 1 and 2). Cyrus is the only non-Jewish human who is called “messiah” in the Bible, because he freed the Jews from captivity in Babylon. Even though in Pasargadae only a few columns of the old palaces have remained (pic 3) fortunately the inscriptions, which were done in three languages, Old Persian, Elamite and Akkadian, survived. Carved into the rock in cuneiform script they were decoded by archeologists and tell us many things about Cyrus (pic 5).

Four later emperors were buried in nearby rock-carved caves in an almost surreal looking place called Naqsh-e Rustam (pic 6). Next to the cave entrances we recognize in the relief carvings the praise of their deeds and greatness. In one case we see a fravahar, the Zoroastrian symbol for a personal spirit, with the two bird wings, a circle and a figure standing in the circle (pic 7 and 8). It is unclear what was actually placed in the tombs as Zoroastrians usually leave their corpses on a tower to be eaten by vultures.

The only ancient building around, Ka’ba-ye Zartosht, ‘the cube of Zoroaster’, which is situated to the left in front of the huge rock wall, confronts us still with a mystery. Its base stands about three meters below the present day ground level and dates from the same period as the tombs, which means the level of the tombs must have been about six meters above the base of the tower. Why did the builders climb up this high for their work – which was very difficult anyway – taking into account the tools that were available in those days? Nobody knows for sure (pic 9). 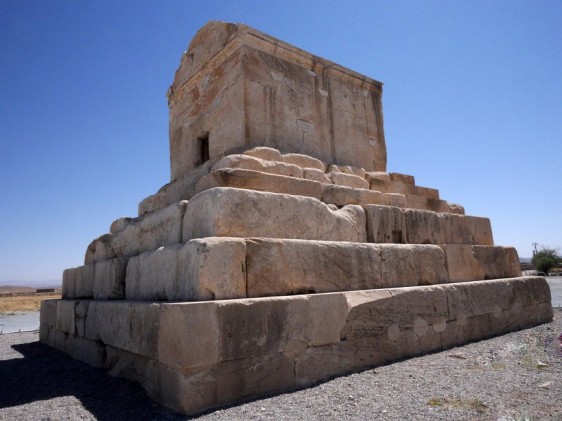 When the site was rediscovered in the 19th century and the old scripts were not decoded yet, the archaeologists presumed that the last picture (pic 10) showed a scene from Persia’s national epic Shanameh with the mythical hero Rustam on a horse, reason why the location was named Naqsh-e Rustam, the inscription of Rustam.

Later research, however, proved that the scene, which is placed much lower than the tombs, was added a few centuries later during the time of the Sassanid emperors who wanted their greatness to be shown in the monument as well. We see the triumph of Shapur I (on the horse) over the Roman emperor Valerian and Philip the Arab. But as Rustam is still very popular in Iran, the name Naqsh-e Rustam remained, even though he is nowhere to be seen on the site.

Finally I visited the biggest and most impressive location, one of the Achæmenid capitals, Persepolis (Persian Takht-e Jamshid).

In this virtual reconstruction from 1884, when Persepolis was rediscovered by western archeologists, we see an artistic impression of the palaces before Alexander the Great destroyed most of them in 330 BCE. Takht-e Jamshid was the major capital of the Achæmenid Empire with a collection of impressive palaces. The columns and stairs where all built of rock but the ceilings where made of wood. When Alexander arrived, he set the whole complex on fire. The area was abandoned and the Sassanids used many of the rocks to build their capital.

Whatever has remained, or has been restored today, still shows us a lot about the conventions at the court of the Achæmenids and life in general in those days (pic 1, 2, 3 and 4). The Persian Empire was a multi-ethnic state. Nations which had been conquered were allowed to keep their customs and religion and some of their artisan styles were reproduced in Persepolis, e.g. the Iamassu, the protective deities combining human, eagle and lion features, that are Assyrian in origin (pic 5,6).

Some of the horse- and bird heads on top of the columns, in many cases thrown over by Alexander’s men, could be restored (pic 7,8).

The main palaces were raised about two meters above the ground and the foundations were decorated with beautiful friezes (pic 9,10,11,12,13). Many reliefs show the visiting dignitaries and warriors from various countries, distinguishable by their clothing and head-dresses.

The most common motive is the lion attacking the bull. It is a Zoroastrian symbol of Nowruz, the vernal equinox, for which the lion stands for. The powers of the eternally fighting bull (personifying the earth) and the lion (personifying the sun) are equal (pic 12).

Chariots with horses were used in battle and as representative vehicles. The expertise in horse breeding, which the Persians had taken over from their Aryan ancestors, gave them an important advantage over their adversaries (pic 13). And again the powerful symbol of the Zoroastrians, the fravahar can be seen (pic 14). Of course, some of the emperors are also depicted, like Xerxes I who is leading some ritual (pic 15). (We would have loved to have one of those umbrellas, as the sun was scorching hot during our visit.)

Mahendra (aka Ananya) grew up in Munich; after school he travelled to India overland and took sannyas in Pune. He ran the Vihan Center in Berlin, was a guard in the ashram, a DJ around the world, and also worked on the Ranch, video recording and more. Since 1993 he has been working in IT, video production, as a DJ, event organizer and chanter – and loves mountain hikes. www.planetoflove.net – vimeo.com