Islamic Art and Culture in Iran

Part 3 of Mahendra’s journey notes and photos in Iran.

In the second part of Mahendra’s Iran trilogy (Ancient Sites in Iran) you read about the origins of Persian culture before it was influenced by Islam and saw photos of artwork of that time.

Iran has been a very popular destination for all kind of conquerors throughout the ages: Aryans, Scythians, Greeks, Arabs, Mamluks, Seldjuks, Mongolians, Afghans and a few more tribes swept at some point through the Iranian highlands and established an empire until they lost ground to a stronger successor.

However, the conquest by the Arab Caliph Umar, not long after Mohamed’s death in 632 AD, proved to be the longest-lasting change in Iranian history; all rulers were followers of Islam. This event, writes Richard Foltz in Religions of Iran, “is seen by many Iranians as the single greatest disaster to befall their country throughout its long and often glorious history. The fact that this trauma was inflicted by the Arabs, a people the proud Iranians had never taken seriously and whom they viewed as being uncultured in the extreme, adds insult to injury… The still very popular tenth-century epic Shāh-nāmeh by Ferdowsi, though compiled by a Muslim for Muslims, paradoxically depicts the Arab conquest as the ultimate and culminating tragedy in the long heroic history of pre-Islamic Iran.”

The majority of Iranians, which I spoke to during my visit, expressed similar views and the dislike of Arabs and Arab culture is indeed still quite common. So it is not surprising that the original spirit of the Persians survived and found ways to express itself in unique ways within the Islamic world. For example the language; the writing was changed to Arabic lettering, but words and grammar remained Persian, nowadays called Farsi.

Islam itself was reformed and refined in Iran; so many historians talk about Persian Islam being an independent culture. The spiritual form of Islam, Sufism, flourished especially in Iran and became famous through many poets and mystics like Mansur Al-Hallaj, Ferdowsi, Omar Khayyam, Farid al-Din Attar, Jalal al-Din Rumi and Hafez. And last but not least the Persian style of architecture became the finest style of Islamic architecture which spread into Central Asia and India.

In Isfahan, the capital of the Safavid dynasty (approx. 1500 to 1720 AD), we find some of the most outstanding works:

Chehel Sotoun (40 column hall), reception hall of Shah Abbas II, one of the Safavid emperors, built around 1650 AD. The main hall has some huge paintings, depicting life at the royal court. (pics 5–11)

Masjed-e Emam, the great mosque of Isfahan. The architects of religious buildings in Islamic countries were facing a difficulty: how to create an awe-inspiring atmosphere without pictures or statues of deities or prophets? With domes, arcs, calligraphy of Koran quotes, minarets and in this case 425,000 colored tiles they did a fantastic job. (pics 14–21)

Sheik Lotfollah mosque, another wonderful piece of sacral Safavid architecture built during the first half of the 17th century. (pic 22)

After the collapse of the Safavid empire in 1732, the power of the Persian empire declined over the years but the architectural artwork still flourished all over the country, as we can see in Shiraz and Kashan.

In Shiraz the Naser-Ol-Molk mosque was built from 1876 till 1888 by the order of Mirzā Hasan Ali (Naser ol Molk), a Qajar ruler, and is particularly famous for its superb colored windows. (pics 1-7)

In Kashan we see some lovely secular architecture:

Fin Garden, a huge garden with luxurious buildings which have been developed by various dynasties. The system of ponds, fountains and canals provides a pleasant cooling during the hot Iranian summer. (pics 8–14)

Manouchehri House; besides Fin Gardens, Kashan is also famous for beautifully designed and richly decorated mansions built by wealthy merchants in the 18th and 19th Century. Manouchehri House is nowadays one of Iran’s finest hotels. (pics 15–17)

The Old Hamam; because of the extreme climate in most parts of Iran, with very hot summers and very cold winters, hamams (steam baths) were very popular and often beautifully decorated. 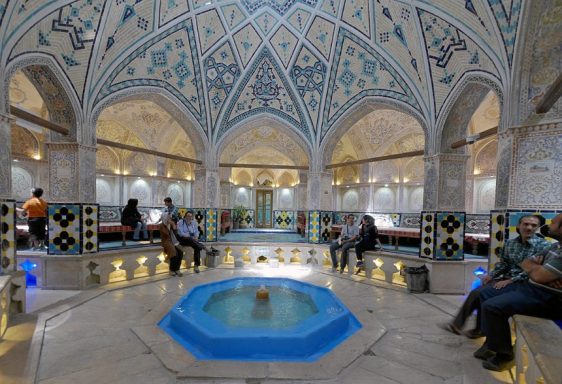 Finally, I would like to shortly comment on the present-day situation. For tourists Iran is quite safe at the moment. I didn’t hear about any thefts and even single female travellers could use public transport without any trouble, on the contrary, people were very helpful and friendly. All Women have to wear the headscarf (hijab) but, with that, local man stare much less at western women than in other Asian countries.

Many residents, particularly around Tabriz and Teheran in the north, regard the god-state as a very restrictive and unfortunate institution, but they are also very proud of their traditions and don’t want to be westernised too much.

Many things in contemporary Iran are like in an absurd drama. A good example is the Twitter message Iran’s supreme leader Ayatollah Khameini sent out to the young people in the west after the terrorist attacks in Paris. He speaks out quite convincingly against terrorism and pleads with the young people of Europe not to retaliate against Muslims in general. Sounds great, but when one finds out that Twitter (like Facebook) is blocked in Iran, one wonders, what he is really up to.

There is a lot of censorship on the web, but software to bypass the blocking is freely available. Knowing that the laws are sometimes quite drastic in Iran, I asked some educated people in Tehran whether it’s dangerous to use the officially banned Facebook. “No, unless you try to start a revolution, it’s fine. Everybody is using it, even the president,” was the surprising answer.

If you feel like exploring amazing nature, culture and spirituality, Iran still has to offer a lot and you may find — like me — the spirit of the mystics and poets still alive today:

I Have Learned So Much

A Christian, a Hindu, a Muslim,
a Buddhist, a Jew.

The Truth has shared so much of Itself
With me

That I can no longer call myself
A man, a woman, an angel,
Or even a pure
Soul.

Of every concept and image
my mind has ever known.

From: Hafiz ‘The Gift’
Translated by Daniel Ladinsky

Mahendra (aka Ananya) grew up in Munich; after school he travelled to India overland and took sannyas in Pune. He ran the Vihan Center in Berlin, was a guard in the ashram, a DJ around the world, and also worked on the Ranch, video recording and more. Since 1993 he has been working in IT, video production, as a DJ, event organizer and chanter – and loves mountain hikes. www.planetoflove.net – vimeo.com

A Different Kind of Guy

Ineffable Mysteries: an anthem for life