Article 25: By the beginning of the Permian, many of the continents of today meet in supercontinent Pangea. The end of the Permian is the largest mass extinction recorded in the history of life on Earth.

By the beginning of the Permian, the motion of the Earth’s crustal plates bring Gondwana and Laurasia together in a supercontinent, known as Pangea. Many of the continents of today, in somewhat intact form, meet in Pangea, which stretches from the northern to the southern pole.

Pangea is shaped like a thickened letter “C.” The top curve of the “C” consists of landmasses that will later become modern Europe and Asia. North and South America form the curved back of the “C”, with Africa inside the curve. India, Australia and Antarctica make up the low curve. Inside the “C” is the Tethys Ocean. Most of the rest of the surface area of the Earth is occupied by a corresponding single ocean, known as Panthalassa. Little is known about the huge Panthalassic Ocean, as there is scant exposed fossil evidence available.

Models indicate that the interior regions of this vast continent are probably dry, with great seasonal fluctuations due to the lack of a moderating effect, provided by nearby bodies of water. Only portions of this interior region receive rainfall throughout the year. On land, the giant swamp forests of fern-like plants of the Carboniferous begin to dry out. The mossy plants that depend on spores for reproduction are being replaced by the first seed-bearing plants, the gymnosperms. Gymnosperms are vascular plants, able to transport water internally. Today’s conifers are gymnosperms, as are the short palm like cycads and the gingko.

Scene from Permian period, when climate turned cool and dry and allowed for Gymnosperms to become dominant

Two important groups of animals dominate the Permian landscape: Synapsids and Sauropsids. Synapsids have skulls with a single temporal opening and are thought to be the lineage that eventually leads to the mammals. Sauropsids have two skull openings and are the ancestors of the reptiles, including dinosaurs and birds.

In the early Permian, it appears that the Synapsids are to be the dominant group of land animals. The group is highly diversified. 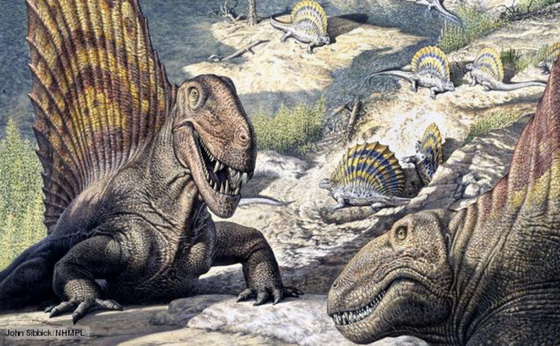 Synapsid reptiles from the Permian Period: Dimetrodon in the foreground with several Edaphosaurus behind

The earliest, most primitive Synapsids are the Pelycosaurs, which include an apex predator, a genus known as Dimetrodon. This animal has a lizard-like body and a large bony ‘sail’ fin on its back, that is probably used for thermoregulation. Despite its lizard-like appearance, recent discoveries have concluded that Dimetrodon skulls, jaws and teeth are closer to mammal skulls than to reptiles.

A red-eared slider and a mallard; both are sauropsids

In the late Permian, Pelycosaurs are succeeded by a new lineage, known as Therapsids. These animals are much closer to mammals. Their legs are under their bodies, giving them the more upright stance, typical of quadruped mammals. They have more powerful jaws and more tooth differentiation. Fossil skulls show evidence of whiskers, which indicates that some species have fur and are endothermic. The Cynodont (‘dog- toothed’) group includes species that hunts in organized packs. Cynodonts are considered to be the ancestors of all modern mammals.

Procynosuchus was a cynodont from the Late Permian. It is considered to be one of the earliest and most basal cynodonts. Remains have been found in Germany, Zambia and Africa. It was 60 cm (2 ft) long.

There are indications that the climate of the Earth shifts during the Permian, with decreasing glaciation as the interiors of continents become drier.

The end of the Permian is the largest mass extinction recorded in the history of life on Earth: 90% to 95% of marine species becomes extinct, as well as 70% of all land organisms. In a blink of Geologic Time – in as little as 100.000 years – the majority of living species on the planet is wiped out of existence. The Great Dying affects many groups of organisms in many different environments, but it affects marine communities by far the most, causing the extinction of most of the marine invertebrates of the time. The recovery from the Permian-Triassic extinction event will take 30 million years.

There is significant evidence that massive flood basalt eruptions from magma output, in what is now the Siberian Traps, contributed to environmental stress, leading to the mass extinction. The massive eruptive event which formed the traps – one of the largest known volcanic events of the last 500 million years of Earth’s geological history – continued for a million years and spanned the Permian-Triassic boundary, about 251 to 250 million years ago.

Based on the amount of lava estimated to have been produced during this period, the worst-case scenario is an expulsion of enough carbon dioxide from the eruptions to raise world temperatures by five degrees Celsius.

Another hypothesis builds on the flood basalt eruption theory. Five degrees Celsius would not be enough increase in world temperatures to explain the death of 95% of life. But such warming could slowly raise ocean temperatures, until frozen methane reservoirs below the ocean floor near coastlines melted, expelling enough methane – among the most potent greenhouse gases – into the atmosphere to raise world temperatures an additional five degrees Celsius.

The reduced coastal habitat and highly increased aridity probably also contributed. A more speculative hypothesis is that intense radiation from a nearby supernova was responsible for the extinctions.

In 2006, a group of American scientists from the Ohio State University reported evidence for a possible huge meteorite crater (the Wilkes Land Crater), with a diameter of around 500 kilometers, in Antarctica. The crater is located at a depth of 1,6 kilometers beneath the ice of Wilkes Land in Eastern Antarctica. The scientists speculate that this impact may have caused the Permian-Triassic extinction event, although its age is bracketed between 100 million and 500 million years ago.

Some groups survive the Permian mass extinction in greatly diminished numbers, but they never again reach the ecological dominance they once had, clearing the way for another group of sea life.

A quarter of a billion years ago, long before dinosaurs or mammals evolved, the 10-foot (3 meter) predator Dinogorgon, whose skull is shown here, hunted floodplains in the heart of today’s South Africa. In less than a million years Dinogorgon vanished in the greatest mass extinction ever, along with about nine of every ten plant and animal species on the planet. Credit for Photograph: Jonathan Blair

The largest Synapsids became extinct, leaving many ecological niches open. The second group of land animals, the Sauropsid group, weathered the Permian Extinction more successfully and rapidly diversified to fill them. The Sauropsid lineage gave rise to the dinosaurs that would dominate the Mesozoic Era, the almost 200 million years of the Triassic, the Jurassic and the Cretaceous.

Thanks to the University of California, Berkeley, Museum of Paleontology, to Christopher R. Scotese, to National Geographic, and to LiveScience

Why seek at all for a purpose?