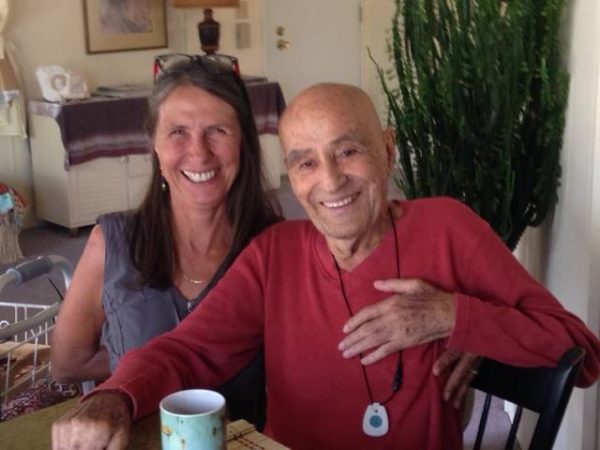 Photos thanks to Bhagawati, Maneesha, Bettina and Shunyo

Samudaya (aka Samu, David Eckstein) was born on 20th February 1929 in Czechoslovakia (now Czechia) and was the youngest of his siblings. As a 14-year-old he was taken by the Nazis, together with his family, and brought to five different concentration camps. From the family only he and a sister survived.

They emigrated to the States in the late 40’s or early 50’s. His sister found a “good Jewish husband” (his words) and had as many kids as they had lost, 11. He, on the other hand, was not interested in family or Jewish religion. He worked for a while on the East Coast and became a graphic designer. He then came to Pune and took sannyas in February 1978 – that was his big love affair. His sister and brother-in-law tried to bribe him with $5000 not to go to India, but to no avail.

When I met him in 1979, he lived in #8 and worked in the ashram as a graphic designer. Because he was a holocaust survivor, the German government paid him a pension, on which he lived pretty much his whole life, and very comfortably in India, of course. He told me last June, when I visited him in Sedona, that he still received it. We had not seen each other for 25 years; not after the Ranch and California.

During the last few years he had lived in Sedona. He seemed quite happy, but was in a lot of pain some of which, he said, was from way back. His little trailer was super clean and immaculate and was full of Osho pictures. He was forever grateful to have found him, and he told me cheekily that he even had a sort of lover, one of his caretakers; it sounded sweet. I went to visit him because I am writing a book where I also want to mention how we met. He remembered the story better then me; he was really sharp and knew many details. This is how we met:

I must have just arrived in Pune because I was not yet wearing red clothes; we met in the bidi temple, he chatted me up and I went home with him. He was for me an ‘unusual guy’ to go with; he was so much older – he must have been 50 and I only 23. After we had spent the night together I saw the number on his arm and asked about it. I think he was the first holocaust survivor I had ever met. When the conversation came to how he made a living to stay in India, that’s when he told me that he was getting money from the German government. I then told him about the family I come from, from top Nazis: the Goerings.

We started laughing hysterically, “Only in Pune!” we said.

During our meeting last summer he told me his life story which I recorded. I knew that it had already been published in the Rajneesh Times but could not lay my hands on a copy, so was very happy that I managed to find him, quite by chance actually, via Facebook.

Before we arrived he knew that some old sannyasin friends were coming by, but he did not know who precisely. When we saw each other, “Oh, my god…” and we both started crying. To hear his story was so healing and heart-opening, it went full circle. Only through Osho such a meeting could have happened.

Samudaya’s calligraphy graced many of Osho’s books. He was a resident at the Ranch and worked in publications.

I had known Samudaya since Pune 1. Even though he was part of Osho Academy in Sedona since early on (Kaveesha loved him and honored him especially) and we got to know him better (Anugito and he were both calligraphers), he was not around much because he had a lot of trouble with his body.

Just this last fall we came in contact with him after not seeing him for a couple of years. We visited him in his home where he was under the care of Mayuri, a caretaker who had become a sannyasin through him! We were very happy to spend time with him, and even though he was suffering a lot with his body and mostly had to stay at home, I was especially touched by how deeply he was connected to Osho and the gratefulness he expressed about that. I had seen him rise out of feeling a victim of life – understandable in such horrible circumstances – to laughter and gratefulness and a deep understanding meditation had given him. We visited him a few times, and in December he became sicker, and cancer was diagnosed.

Last Tuesday we visited him in a care facility in Prescott; his health had gone down dramatically. He was happy to see us, and mentioned Abhiyana who had visited recently. He spoke about not knowing when he was going to die, and how it was to be with that – and we still joked. We had the feeling it would be soon, and asked to be notified about changes to his condition, so that a few friends could come and sit with him. His condition remained stable for the next few days.

Then, Saturday morning, we got the call that in the morning he had passed, and that an aide from the facility was with him. The hospice nurse who was called told me that when she walked into the room, she got goosebumps – and she knew he was in peace. We had been sitting meditating at the time of his passing.

That night a bunch of sannyasins in Sedona were meeting for a party, so we gave him a dancing sendoff!

On the Ranch Sheela wanted to show that we were not a group of hippies so asked a few sannyasins to be interviewed by a journalist of the Oregonian. And Samudaya told his story.

At the end of the Ranch, the same journalist meets Samudaya.

“Good,” he said, “now there is no need for double talk any longer, the Ranch was some sort of a camp, a totalitarian place, don’t you think?”

And Samudra, in his very Jewish humour replied, “But there were quite some differences!”

“Yes, first of all the food was much better, but most importantly, it was a camp where I was always afraid of being kicked out!”

Samudaya’s sannyas darshan: Being is herenow, it is what you are right now

Samu and I were hiking buddies in Sedona for years, after having met in Osho Academy. Now he is hiking with Osho on another plane. The dance goes on and on…
Enjoy!
Shunyo Mahom

While living in Sedona I was sometimes present in people’s family constellations. When Samudaya had his constellation, he chose me to stand for his favourite sister, among his 11 relatives who where with him in the concentration camp. This was such a deep experience of pain and love and sorrow I will never, ever forget. Ever since I felt this intimate, loving connection with Samudaya – even from far away after leaving Sedona. Such a gentle, loving spirit…
Sumano

Ah, my Yiddish brother, I am so glad we connected again in your final year on Earth. You taught me many things in the 39 years we’ve known each other – how not to wallow in angry victim mode, how to forgive, and finally how to let go. I still have the precious calligraphy poster of the Rumi poem you so expertly crafted.
The last time I saw him he was fading fast, and his body would not cooperate with his spirit; he was remarkably ok with that. He truly forgave everyone who had done him wrong, and I am proud to say he was my friend and mentor. JAI SAMU!
Abhiyana

Being is herenow, it is what you are right now

A quantum leap for academia