The archbishop of England at the pearly gates

Osho states, “God has been invented. It was people’s need; people needed a protector. In the immensity of the universe, a man feels so alone, so small.” From our series 1001 Tales, compiled by Shanti. 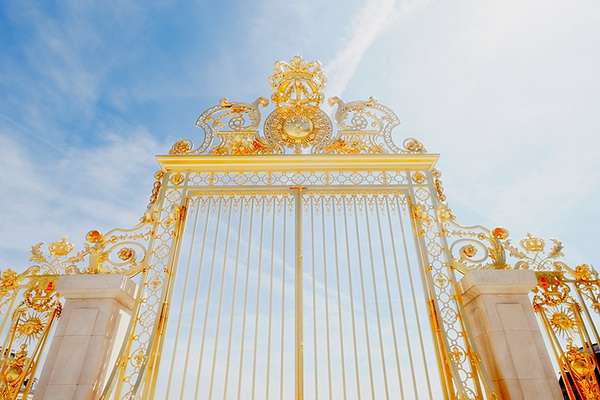 God is a great consolation, but it is not a cure. Existence is not a consolation. To be in tune with it is to be healthy and whole. All the religions of the world have been teaching God; I teach you existence. I teach you to be in tune with that which surrounds you, which is within you and without you. Once you are in tune with it, there is no death for you, no misery, no tension, no worry, but a tremendous peace surrounds you, a contentment which you have never even dreamt of.

God is for those who cannot grow in consciousness, who are retarded as far as consciousness is concerned. It is a kind of toy; retarded people need it. And the moment I say it is a toy, then it is up to you how you want to make it – looking like a monkey or looking like an elephant. It is just up to you whether to give him four hands or one thousand hands. It is your creation. Strangely enough, man believes God created everything. The truth is that God himself is a creation of man’s imagination.

God is the greatest lie you can ever find, because on that lie thousands of other lies depend. Churches, religious organizations go on multiplying lies upon lies, just to protect one lie.

Truth needs no remembrance. Truth is always there, just the same. You don’t have to cram it in your memory. Memory gives you a bondage, a prison; it clings around you, covers you so much, slowly slowly, that you disappear completely. Truth is uncovering yourself from all lies. And there is a sudden revelation that you are part of the immense truth I am calling existence.

We are almost like the waves of the ocean – just on the surface, and the ocean may be miles deep. The Pacific Ocean is five miles deep. But a small wave on the top will never know the depth – her own depth, because she is not separate from the ocean. She will cling to her small entity, be afraid about death, be afraid of losing herself in the vastness, the oceanic infinity. But the truth is, the death of the wave is not a death, but the beginning of an eternal life.

God has been invented. It was people’s need; people needed a protector. In the immensity of the universe, a man feels so alone, so small. The vastness creates trembling in him. What is your existence?

I am reminded of a story by Bertrand Russell.

The archbishop of England sees in a dream that he has reached the pearly gates of paradise. On one hand he is immensely pleased, and on the other hand he is very much troubled, because the pearly gates are so vast, in both directions, that he cannot see the whole gate. It is so high that it is beyond the capacity of his eyes to see. And he himself seems to be just like a small ant, compared to this great gate. He is a little bit afraid. He is no ordinary man, he is the archbishop of England. He feels humiliated just by the gate, and the fear arises, “If this is the situation at the gate, what is the situation going to be inside?”

With fearful hands he knocks on the door, but in the immensity of that space only he can hear his knock. It takes days for him, but he goes on knocking harder and harder. Finally a small window opens in the gate and Saint Peter looks out with one thousand eyes, trying to figure out who has been making a noise. Those one thousand eyes are so shiny, like stars, that the archbishop feels even more reduced – almost to a nonentity.

The archbishop declares himself. He says to Saint Peter, “Perhaps you don’t know me. You can check with Jesus Christ, I am the archbishop of England.”

Saint Peter says, “Never heard of any such thing as England.”

He says, “You are giving me puzzle after puzzle. Who is this fellow Jesus Christ?”

The archbishop is very much shocked. He says, “You don’t know Jesus Christ, the only begotten son of God?”

Saint Peter says, “As far as I am concerned, I have never seen God; I don’t know whether he exists or not. I am just a doorkeeper. Perhaps somewhere in the most interior parts of paradise somebody exists who thinks that he is God, but I have never come across…”

It is such a shock that the archbishop wakes up perspiring.

The story is significant because it shows how small we are and how big the universe is. Naturally primitive man was not able to adjust himself to the idea of this vastness of the universe without giving it some personality and without making himself in some way related to that personality.

God was an effort of the primitive mind of man to give existence a personality. Then he becomes God the father. Then you can make some relationship with him. You may even be against him, but at least there is someone you can be for, you can be against; there is someone who is greater than you, who is going to protect you, who is your guarantee. God is simply the poverty of human consciousness.

Making love to the stars, sky and clouds

God has made man and war just for vultures!