“The song of a poet, the music of a musician, will go on echoing down the corridors of time. It belongs to eternity,” states Osho. 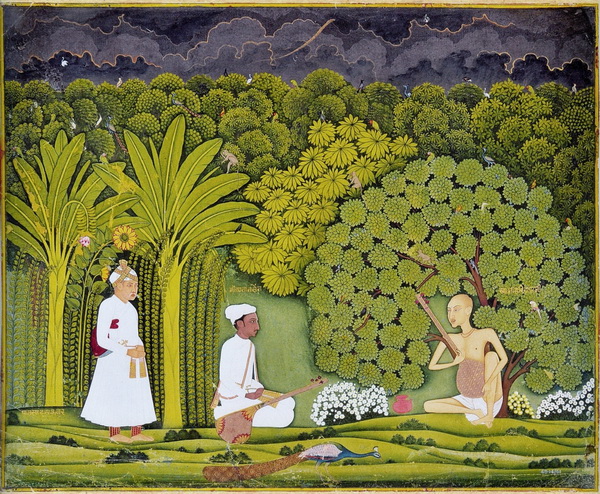 The poet does not claim domination over anybody; he simply shares his heart, his melody, his songs. He is really an emperor. He may be nobody as far as the power elites are concerned, but he reaches to the very heart of humanity. The presidents will be forgotten, the prime ministers will be forgotten, but the song of a poet, the music of a musician, will go on echoing down the corridors of time. It belongs to eternity.

I am reminded about one of the emperors of India, Akbar.

His court musician was Tansen, and it was thought that Tansen had never been surpassed. His music was magic, had a hypnotic power, and Akbar could not be satisfied even listening to him every day.

Late in the night, one day when he was leaving the palace, Akbar said to Tansen, “Tansen, I have never told you, but the idea has arisen in me many times… I cannot conceive anybody to be a better musician than you; it is just inconceivable. But forgive me… the idea arises in me, that if your teacher is alive, I would like to see him who has taught you music, with whom you went through this discipline. Who knows, your teacher may be a greater musician – although I cannot conceive in what way he can be greater than you.”

Tansen said, “My teacher is alive and you may not be able to conceive of it, but I am just dust under his feet. I cannot even think of comparing myself with him. The distance is so great.”

Akbar became very excited, he said, “Call him to the court, we will welcome him, we will reward him, there will be a celebration!”

Tansen said, “That is a difficult thing because he is a sannyasin and he lives just very close to the palace by the side of the Yamuna river in a small hut. His name is Haridas, and he never sings, never plays, unless it happens spontaneously; not on demand. So it is very difficult.

“If you really are interested, then we will have to sit by the side of his hut early in the morning, three o’clock, because that is the time when he wakes up, takes a bath in the river; and then – he has a small statue of the goddess of wisdom – before the statue he plays. There is no other audience at that time. And you will have to hide behind the hut, in the trees, because if he becomes aware that somebody is listening he may not sing, he may not play on his instruments. He is a crazy man!

But who has ever heard that great creators can be other that crazy? They have a certain madness, they are not sane people in the eyes of the world.

Akbar was so excited that he said, “Tonight we will go. You don’t go home. Sleep here, and at three o’clock we will be by the side of the hut.”

An emperor, a great emperor – he ruled over the whole of India – went to listen to music as a thief! And when he heard it, Tansen could not believe it, tears were flowing from Akbar’s eyes, just of joy and ecstasy.

When they returned Akbar said to Tansen, “If your music is magic, Haridas’ music is a miracle. But why is there so much difference? Up to now I used to think it is inconceivable that anybody can be a greater musician than you. Now I am thinking you stand nowhere. That poor sannyasin, your master, has something that is very elusive – but it stopped my thinking. I forgot all about time. I forgot that I am a great emperor.

“Those few moments have been the greatest moments in my life. What is the reason that you cannot reach to those heights?”

The answer has to be remembered.

“His music is born out of his abundant love; for no other reason, for sheer joy, just the way fragrance comes from flowers. It is not for sale, that is what makes the difference.

“I am a great technician. I have learned his whole technique, there is no flaw in my technique. But my heart is empty. I have not known that ecstasy, I have not experienced that being, I have not been touched by the divine.

“He is absolutely mad. He is drunk with the divine, and the music is not through any effort, but something spontaneously coming out of him. That’s why we cannot demand it.”