A review by Subhuti of the ninth and final episode of Star Wars, with a few digressions to the past and present – and to Japan. 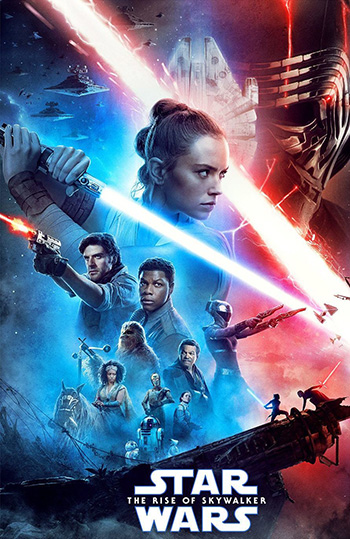 The balcony in that faraway, unknown cinema was a sea of orange. It was filled to overflowing with Osho’s sannyasins. In 1977, when the first Star Wars movie arrived in Pune, the ashram in Koregaon Park almost emptied as we jumped into taxis and rickshaws to drive across town to see it.

Fortunately, Osho’s daily discourses in those days were held in the morning. So, if you weren’t booked for evening darshan, and didn’t mind skipping music group in Buddha Hall, the way was clear to see what the fuss over Star Wars was all about.

Afterwards, I was tempted to write a message to Osho, asking him to conclude one of his morning discourses, not with his usual “enough for today” but with the popular Star Wars catchphrase “May the Force be with you!” But since Osho was emphasizing that meditation, consciousness and the ultimate experience available to human beings had nothing to do with force, I thought better of it.

Still, the movie offered a mystical dimension of its own: A power known as “the Force,” an energy field created by all living things, binding the universe together.

The Force was wielded by two rival factions: the Jedi knights, who were the peacekeepers, and the Sith, ancient enemies of galactic democracy.

Watching that first Star Wars, it became obvious to me that it was basically a classic western cowboy movie: white hats versus black hats, good buys versus bad guys. What was new was the scale of the conflict: no longer just a local range war in some corner of the Wild West, but a battle spanning the entire universe.

This expansion was made believable by stunning new special effects, created by Industrial Light and Magic, Lucas’ own company that began work in an old warehouse in a Los Angeles suburb.

As is now the stuff of Hollywood legend, Star Wars exploded into a blockbuster hit, becoming one of the highest-grossing movies of all time and spawning a whole string of sequels.

In 2012, Disney Studios bought the franchise from George Lucas and continued the saga, ending, finally, in today’s release, Star Wars: The Rise of Skywalker.

It’s an entertaining movie, drawing together the threads of previous episodes and ending – no surprises here – with an epic struggle between Rey, the last Jedi, and Emperor Palpatine, the last Sith.

Her enemy, Emperor Palpatine, played by Scottish actor Ian McDiarmid, is old, ugly and mad for power. He wears a hooded black robe and his ancient body exists only on a life-support machine.

As they duel in the depths of a neo-gothic castle, high above their heads, another battle is fought between the Empire’s massive battle fleet and the Resistance.

Sure enough, Rey and the Resistance are victorious and the universe is saved from an oppressive dictatorship.

So, the movie delivers a heart-warming, feel-good ending to which no audience can possibly object.

As the credits rolled and the cinema lights came on, I blinked my eyes and returned to Planet Earth. Here on the ground, I reflected, life is not so simple as it appears on the silver screen.

Boris Johnson, winner of the UK’s recent election, while still a schoolboy at Eton, famously declared, “I want to rule the world!” Is this any different from Emperor Palpatine’s galactic ambitions? Perhaps only in scope: Johnson will have to settle for ruling the UK.

Both Labour and Conservative invoked the archetypes of good and evil as weapons to try and sway the public vote:

Boris Johnson was accused of planning to sell the nation’s much-beloved National Health Service to greedy American pharmaceutical companies – bad guy! But his jokey, folksy, bumbling style endeared him as a good guy to many voters.

Jeremy Corbyn was a left-wing socialist and supporter of terrorism – bad guy! But his track record as a campaigner for human rights marked him as a good guy, too.

In the end, it was Corbyn, thanks to the UK’s conservative-leaning newspapers, who was demonized the most.

Some movies do manage to capture the complexities of life, as personified in our political leaders. Oliver Stone’s Nixon, for example, portrayed the US President as an admirable, though deeply flawed, character. Alas, Nixon didn’t do well at the box office. The film cost $44 million to make and earned only $13 million in return.

The public prefers to keep things simple: make your characters black or white, so we can know who’s good and who’s bad. Clarity, certainty, predictability – that’s what the public wants, here on earth, as it is in Hollywood.

Which is why we’ll never know what would have happened in Star Wars if our beautiful heroine, Rey, had succumbed to temptation, embraced her own dark side, and accepted the throne offered to her by Emperor Palpatine. This would have taken the movie beyond duality, beyond the superficial all-American cowboy philosophy of good versus bad. And the way was open, because George Lucas freely admits that his initial inspiration for the whole Star Wars saga was taken from Japanese culture.

Bearing this in mind, the galactic conflict, the two sides of the Force, could have transcended duality and merged into pure Zen. Star Wars never goes that deep, but then, hey, what movie ever does? What movie director would dare to surpass the cinematic law of the dualistic paradigm?

It is the tension created by conflict between two opposing forces that keeps the audience gripped by the action on the screen. Swept into the storyline, identifying with our heroes, we bite our nails, curl up our toes and worry: “OMG, who’s gonna win?” or, “Will he/she find true happiness in the end?”

Just think for a moment: if duality is transcended and everyone in the story enters into a state of oneness and No Mind: Goodbye box office revenue, hello bankruptcy.

Anyway, leaving such spiritual matters aside, George Lucas acknowledges the debt that Star Wars owes to Japan, and particularly to Akira Kurosawa, the country’s most venerated filmmaker.

Lucas admired how Kurosawa’s films thrust Western audiences straight into the midst of an alien world, without any explanation of its culture and rules.

Lucas adopted the same approach in his Star Wars films, pushing viewers into the centre of galactic struggles amid weird worlds without so much as a by-your-leave.

The plot of Star Wars, so I’m told, is loosely based on Kurosawa’s masterpiece The Hidden Fortress, in which two peasants assist a battle-hardened general and a princess in their rebellion against an evil enemy. Way, way out in the galaxy, Lucas transformed these two peasants into lovable robots: yes, R2D2 and 3-CPO.

And there’s a lot more borrowing from Japan: For example, the ultimate good guys in Star Wars, the Order of the Jedi, bear close resemblance to Japanese samurai. The Jedi knights dress like samurai, too.

By the way, the ultimate bad guy, Darth Vader, also owes much to Japan. His trademark helmet, the sight of which was enough to send shivers of fear through friend and foe alike, is closely modelled on a traditional samurai helmet.

And a famous Japanese actor, Toshiro Mifune, was invited to play Darth Vader. But, apparently, Mifune thought the film was for kids – not far wrong, really – and so he declined the role.

In conclusion, alas, I have to say that Lucas failed to imitate my favourite scene in Kurosawa’s Seven Samurai: The one where a samurai soldier, knowing that he must soon enter into battle with the odds stacked against him, sits peacefully in nature, gazing meditatively at a flower.

This is where Kurosawa comes close to transcending duality.

This is where entertainment comes close to Zen.

Subhuti is a writer, author and gives workshops and sessions in the Enneagram, Tarot Card Reading and Inner Man Inner Woman. subhutianand.com

We are living according to our misunderstanding

The Battle of Desiderata and Top of the Ranch