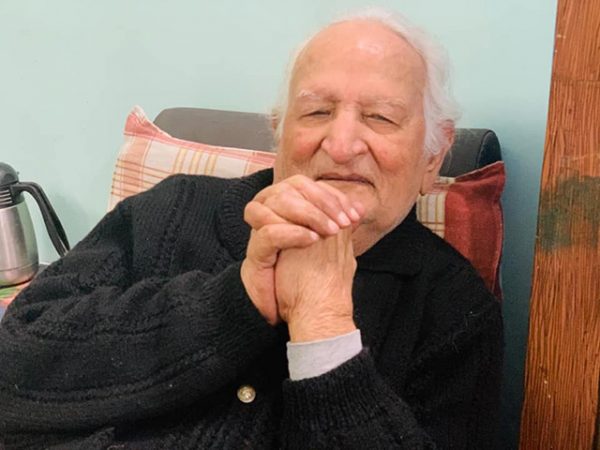 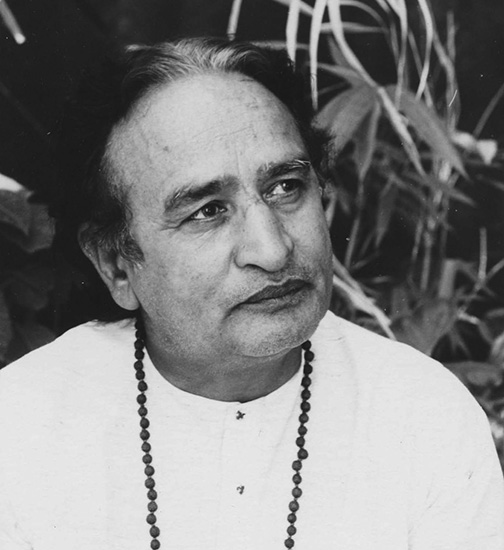 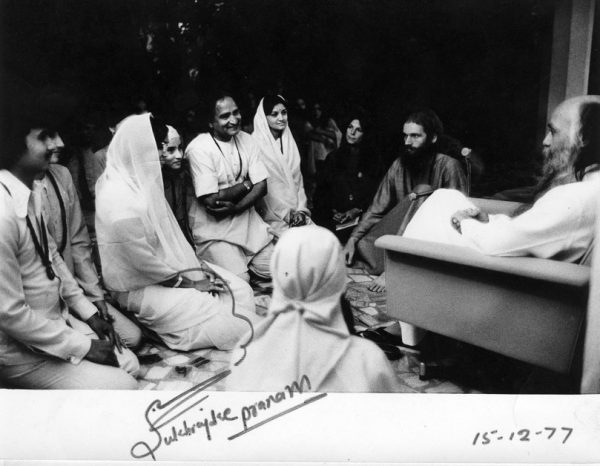 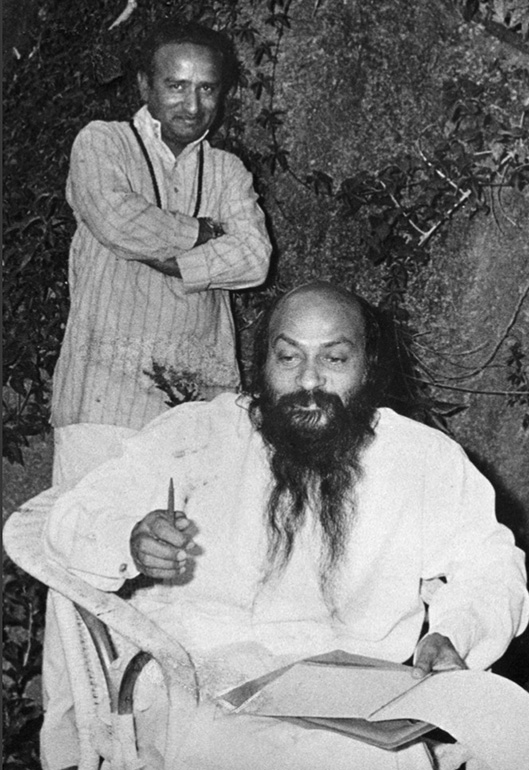 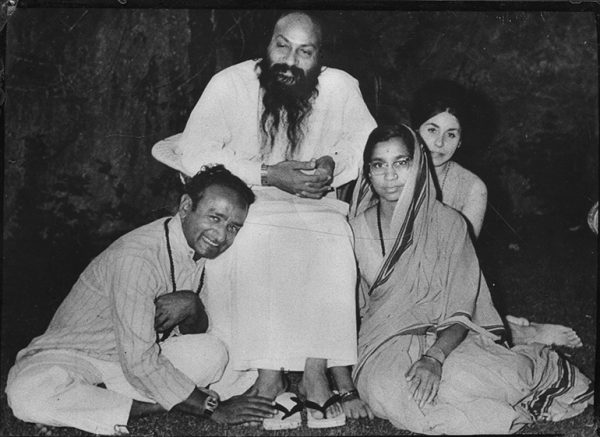 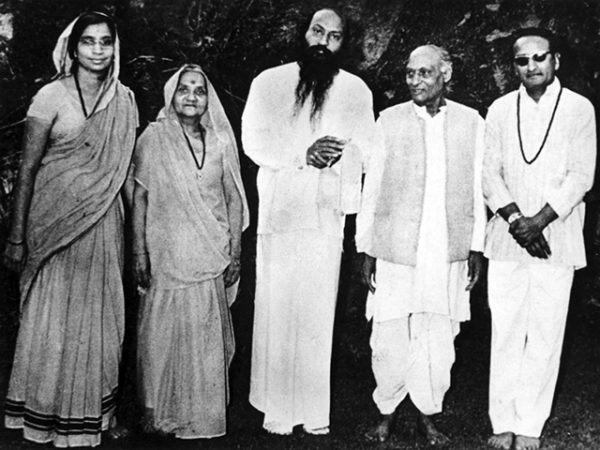 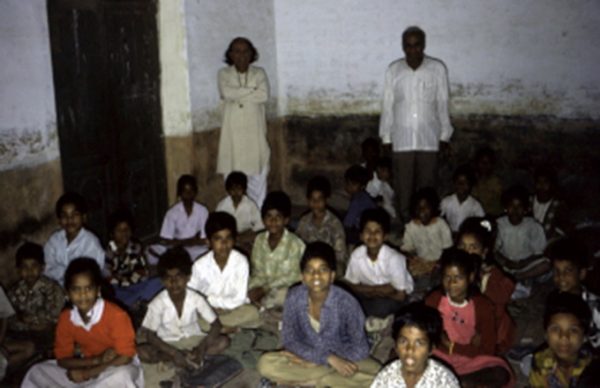 A friend who became a disciple

Swami Sukhraj Bharti was blessed to be one of Osho’s intimate friend from his childhood days. He enjoyed the best of his time with Osho,  playing with him and witnessing the mystical flowering of Osho’s individuality into a Buddha.

Sukhraj was born in 1934, three years after Osho was born. He lived in Gadarwara, where Osho spent most of his childhood.

In 1972, Sukhraj Bharti hosted our Osho Kirtan group wonderfully in Satdhara village, in his country house situated on the tranquil banks of the Narmada River – a perfect place for meditation. There he told us of many juicy and delicious stories while being with Osho. By that time, his whole family – his wife, son and daughters – had all been initiated into Osho’s Neo-Sannyas. Later, his daughter Ma Anand Divya joined the Osho ashram and worked in Hindi publications and also as a receptionist of the ashram’s main office.

Sukhraj was a very poetic person and a passionate storyteller. And why not? He had been very fortunate to spend many years so close to someone who was going to become the Yogpurush, the master of masters who would transform millions of people around the world. And to Sukhraj, he was simply a Baal Saka, a childhood friend…

Young Rajneesh (Osho) made a few friends during his first year at primary school: Kanchhedi Sukul, Shyam Soni, Sukhraj Bharti and Ageha Saraswati. They were some of the closest in his circle of friends, and remained so for many years to come.

Sukhraj was his classmate who sat next to him from day one in that far left corner. He noticed that Osho could already read and that he had beautiful books and sketches in his schoolbag. Osho brought with him a polished stone slate with a fine wooden frame. The slate was among the family’s personal belongings and had been used before by other members of the family. Sukhraj remembers that Osho could draw a cow or a horse within a second, and when asked to draw a bullock cart, he promptly did so. His leather schoolbag, slate and his first pens were in use by the family until the 1960’s.

Osho’s invitation to come and stay at the ashram 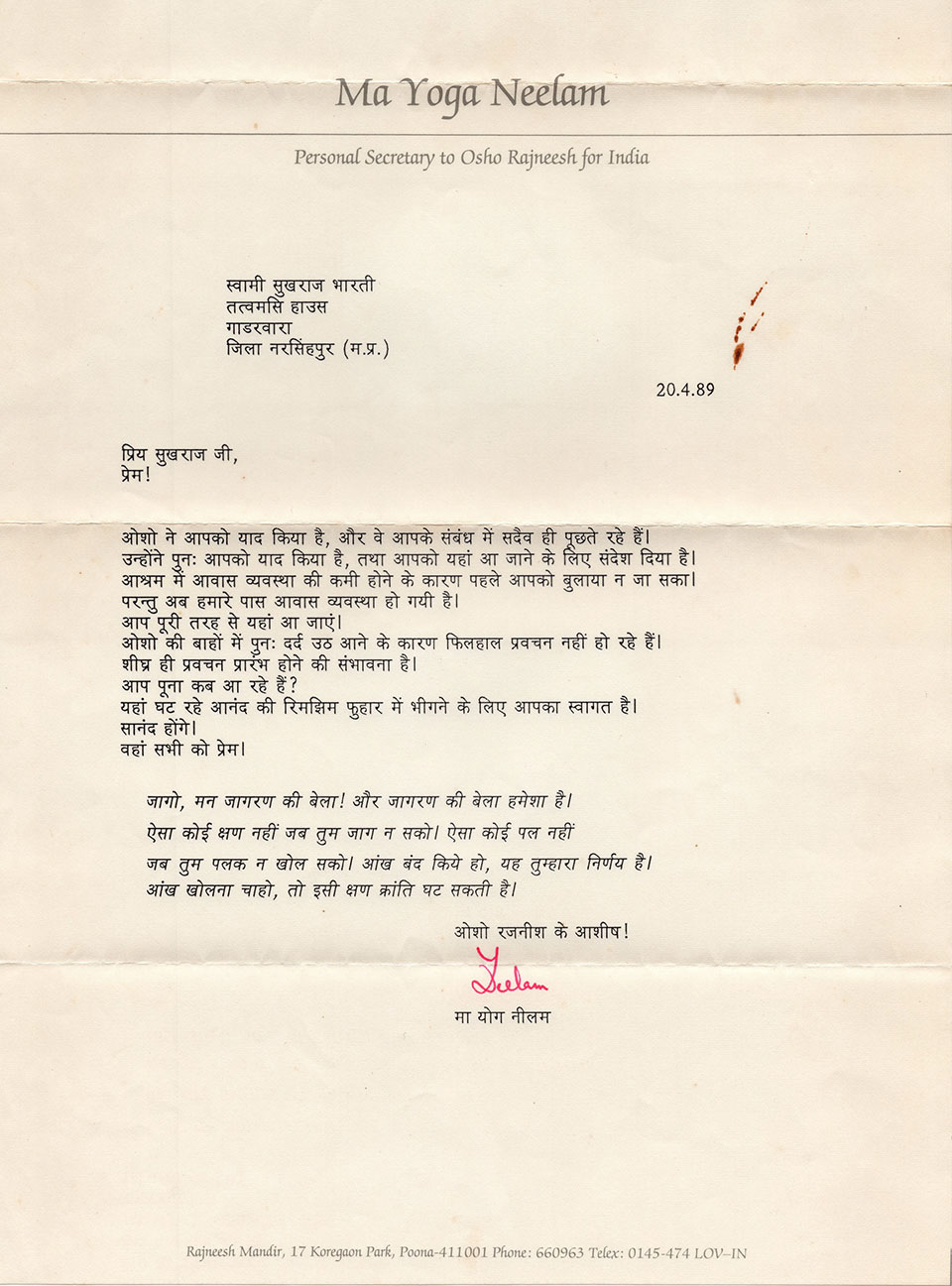 Osho has remembered you and he frequently inquires about you. He has remembered you again and given a message for you to come here. Since there was a scarcity of residential accommodation in the ashram, you were not called earlier. But now we have arrangements to stay.

You come here in totality.

Osho has frequent pains in his arms and therefore there are no discourses presently. Discourses will start soon.

When are you coming to Poona?

You are welcome to be drenched in the drizzle of bliss which is being bestowed here.

Osho speaks about Sukhraj in a discourse

I have been going to ask one of my childhood friends, Sukhraj, who is sitting here… For years it has been that whenever he comes, I never see his wife smiling. I don’t see in her that she has come with joy; it is as if she has come just to keep an eye on him, because here there are so many beautiful women, and he is a beautiful man. And this is a world of people who are absolutely free, who don’t live in bondage of anybody.

She comes to me, she touches my feet, but I have never felt that there is any deep love, respect, feeling, emotion. She seems almost like a zombie, and the reason is clear to me. Perhaps it may not be clear to her or to Sukhraj, but I want it to be made clear to them. He would like to come every day; in fact, he would like to live here with me. What is he doing there? – there is nothing left there for him. And when I am here, and millions of people around the world are coming and going every day…

He loved me when we were so young that now even the memories of those days are difficult to catch up… and he is the only one left. I had many other friends: they came and they are gone, but he has remained with me unwavering, because it was not a question of any ideological agreement, it was a question of love. It does not matter what I say, what I do, what he says, what he does; that is absolutely irrelevant.

So he comes again and again when he can manage. The wife certainly comes reluctantly; otherwise she should be so joyful and she should enjoy all the people around who are living in peace, in love, in freedom, and each moment rejoicing. Here, sitting like a dead corpse simply shows that she has not come. She has to come: she has to come because she cannot leave the husband alone in this strange place.

Thanks for text, translation and photos to Keerti, Anuragi, Neelam and Neeten (Osho Source Book)

You can leave a message / tribute / anecdote using our contact form or writing directly to web@oshonews.com (pls add ‘Sukhraj’ in the subject field). 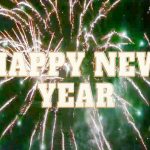 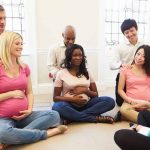 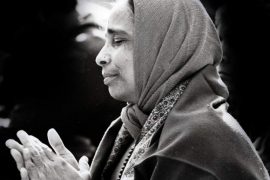 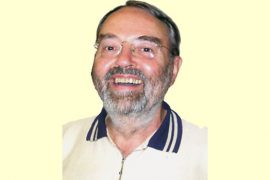 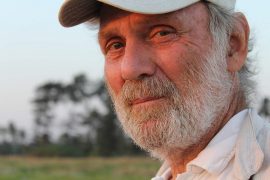