Bhagawati continues her journey from Jabalpur to Bedhaghat and on to Kuchwada.

After experiencing March 21st in Jabalpur under the Maulshree Tree, we move on to stay at Bedhaghat, a small village on the Narmada river, which is the fifth largest in India. It is there that the river flows in a deep narrow channel through the magnesium, limestone and basalt rocks, called the Marble Rocks. Osho speaks about the beauty of this area best seen during a boat ride in a full moon night. We arrive only two nights after the full moon and are ready for the adventure when we are told that the night rides are no longer possible as recently some people had drowned during such an occasion. However, the boat ride just around sunset is exquisite. The rocks there rise to a hundred feet on either side of the Narmada. The scene is serene, the water cool and running quiet. The setting sun casts shadows on the water.

There are many Indian tourists and most of them ask to have their photo taken with us while others invite us for a cup of chai. We are the only westerners around and they enjoy chatting with us. Later in the evening locals perform aarti, touching in its simplicity.

We stay at the Motel Marble Rocks, a government-run establishment. The room typically has crooked light switches, no maintenance, lots of strategically placed mothballs, and the bed sheets are too short. Asset numbers are prominently displayed on every single item in the room – even on the fan, upholstered armchairs, and the water pipe leading to the heater in the bathroom.  The house phone doesn’t work most of the time.

Yet we enjoy it, the view towards the river is lovely.

In the early morning there is a steep walk to take that runs from the hotel to the top of the hill opposite. A friendly dog starts running ahead the moment he sees us and turns his head from time to time as if he wants to make sure we are following. He stays with us until we reach the top, overlooking the chasm. He seems like a little guardian.

There are many small hotels and eateries along the road to the river.  Every second shop in the village sells marble carvings in all sizes but of questionable quality. Hindus come here for pilgrimages and purifications. About one kilometer higher up, the river is quite turbulent – it plunges into a powerful waterfall called Dhuandhaar and is a favorite spot for purification and offerings by Hindus. Some of Mahatma Gandhi’s ashes were immersed in the river at Tilwara Ghat, which makes the area around the river sacred and alcohol is theoretically prohibited like in Gujarat, where he was born.

Rested, we continue by car to Osho Tirth Meditation Center, located close to the village of Kuchwada, where Osho was born. We drive for four long hours on a pockmarked road through rural countryside; to the left and to the right are fields and more fields and huge numbers of spectacular palash trees, without any leaves but adorned with beautiful red flowers which are used to prepare traditional Holi colors.

The center was established by Satyatirth Bharti, originally from Ahmedabad, a humorous man in his sixties with lots of ties to Japan, where he owns several vegetarian restaurants called Nataraj. He also often conducts camps in Japan and has established a meditation center there. He lives with Kavita in a rather eccentric looking round three-storey tower, the outside embellished with relief-terracotta tiles made in Rajasthan, while the interior – floors, walls, ceiling – is entirely furbished in wood.

The center consists of a large main plot with a variety of buildings, dormitories and rooms, a pyramid meditation hall, kitchen and eating area, yet less than a handful of people actually live there. Ambi from Japan commutes between Japan and India and seems in charge of all center affairs when she is in residence; it is she who gives us a tour of the properties.

The entire scene looks sadly neglected and in need of repair and maintenance.  The buildings are not old but cracking in many places and everything is very dusty; the lotus ponds and grassy areas are yearning for a gardener’s caring touch. Inside the meditation pyramid are lots of cobwebs high up. Many hand-written English and Hindi signs are carelessly pasted on various walls. Right now a few locals are building a compound wall around the main property but other than that there isn’t much activity.  The busiest person is Ramesh from Rishikesh, who is a talented cook and waiting to fly to Japan to work there in the catering industry.  I have visions of a sannyasin crew descending on this place to renovate it to the beautiful place it could be!

The second plot opposite has three buildings, in one of them is a large selection of Osho books and photos for sale; all is somewhat bleached out from the harsh light entering the building at the top. There’s an unfinished large pond too.

We spend one night in a very basic room, with no towels provided (Ambi kindly lends us one of hers), not even a little shelf or table to put something on, no bedside lamp, just a huge neon rod on the wall opposite the bed and a photo of Osho hanging askance close to said rod. The wall to the bathroom is damp, the room is dirty and the windows have probably not been cleaned since the building was finished. We appreciated the clean pink sheets and pillow cover, however.

The next morning we drive over a dusty road the short distance to Kuchwada. The village appears as it must have looked like many decades ago. Allegedly a few thousand people live there but I doubt it. The two-storey house Osho was born in is surrounded by a strong fence with a locked gate. A few men have gathered and sit to the side of the building, obviously curious what we are up to. Ambi unlocks the gate and we walk in. Downstairs are several small rooms, in the back is what must have been the kitchen. A few large mounted photos of Osho are leaning against a wall and some small candles in clay pots have been placed at random. The floor is stamped earth. The ceiling is low. A steep narrow staircase leads upstairs. I do not feel anything in particular but observe the precarious state of upkeep also here.

Leaving the house we see a crowd of kids and young men with black and dark green colors dripping from their hands, looking at us with lust. Our driver looks nervous. The men sitting to the side of the house are keenly watching, not interfering. It feels uncomfortable, menacing. I decide to make a dash for the car, jump in and lock the door on my side. In that moment one of the kids rushes over and tries to pry the door open. Meanwhile Anatto manages to get in the other side and also locks the door. Frustrated, the horde jumps on the car and smears their colored hands all over it.

The driver seems a bit dazed and more so when we tell him to go on to Garadwara, where Osho grew up. But he drives on. We are accosted again and again by young men who block the road and only very reluctantly allow us through. Most of them appear drunk. We are told that Holi lasts for five days in this area and this was to be the last day of celebrations. As the driver is by now visibly shaken by all the encounters, we decide to drop Garadwara and return to Bedhaghat.

At some point I ask myself, ‘Why am I here?’ and out of nowhere an answer comes, ’Why do you think I left?’ which has me giggling.

We happily return to the same room at the Motel Marble Rocks, which now appears like a luxury resort.  And it is quiet. Sitting on the balcony looking over to the rocks, silence drifts in from the edge of my vision, over the clear greenish water of the river, enveloping me. There’s an unfamiliar bird call and the cry of a crow. For a long time I watch a woman emerging from a rubble of rocks with a sack on her head, steadily approaching, her steps sure, unrushed. 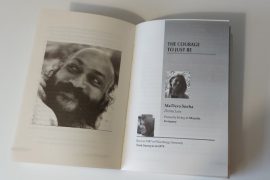 Past the Point of No Return – 2

Past the Point of No Return