Part 3: Bodhena arrives in Poona in 1977 and enrolls for his first groups

When I first arrived in Poona in November 1977, I did not have much of a clue of what was going on at the ashram. Sure, I was a spiritual seeker of sorts, but pretty much in my head about it and quite frustrated about the answers I was getting to my questions in the environment I’d been living in. I was 29 years old and I’d just finished university, and the only thing I felt like doing was to go back to India. This time, however, whether it was really clear to me or not, I was looking for spiritual guidance, but I did not quite know how to go about to find it, at least on a conscious level.

So when a friend who had given me a ride to the airport had suggested to look up “Rajneesh in Poona” – “He’s a good guru, go and see him!” – it had sounded like a fair enough idea to check the place out for a couple of days. And so it came that, about two weeks later, on a bright and sunny morning, I found myself and my backpack in front of the ashram gate. Fortunately, I didn’t run away (nor, for that matter, did I ever really return from there, either).

I immediately liked the sannyasins. They were quite a cool bunch of people, loose and natural, and I felt very comfortable among them. I also was very much interested in the program that the ashram was offering. Right on the day of my arrival I went to the ashram office to book a few groups, and started participating in the meditations.

It took me a little longer to find out what was going on with the guy with the long beard and the white robe who was obviously at the center of things (and I can’t say that I’ve ever really gotten to the bottom of that, not to this day). Supposedly, he was ‘enlightened’, and nothing in my life had prepared me for such an encounter, even less so with a high-caliber master like him.

It wasn’t until I opened up a bit more and started to become sensitive to the energy field that surrounded him, an energy that permeated everything in and around the ashram and that became stronger the closer I got to him physically. In a way, the energy was like a beautiful drug that hung there in the air and just needed to be breathed in to get me on a really nice high, at times more mellow, at other times so strong that it seemed to overwhelm me. And besides just feeling good, there were side effects that could be of immense help for a seeker on the path. It added a great amount of clarity to anything I’d focus on, and when I’d close my eyes and start groping around inside, all the sudden walls and barriers disappeared that had been there before. It was this energy that was giving a different meaning, a whole new dimension to everything that was happening at the ashram, and to be perceptive to it was the key to at least to begin to understand what was going on there. 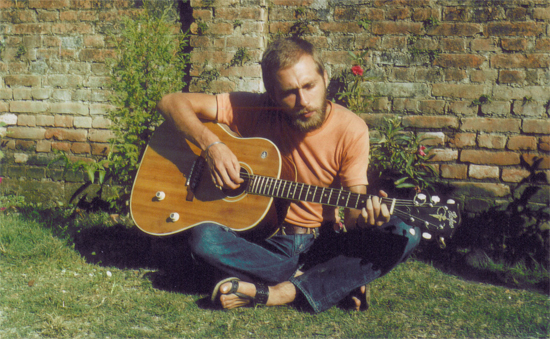 Within a few days after my arrival the groups started that I had booked, and slowly, but surely life at the ashram started to swallow me up. After a couple of introductory groups, Centering and Enlightenment Intensive, the Tao group began, and I got a hands-on taste of what is commonly known among sannyasins as ‘working on your shit’.

During those days, a few of the groups held at the ashram included an open expression of physical violence, and that could not only be directed against a pillow in the corner, but against other group participants as well. We were not supposed to hurt each other, so the group leader had to be absolutely on top of the situation. Since this was happening in Osho’s energy field, the group leaders could use that as a support and by far exceed the limitations that they would have had with their normal professional expertise. Still, occasionally someone did get hurt, and those people could be seen hanging out on the Zen Wall (a low wall that ran from near the main gate to opposite Lao Tzu) or in the smoking temple, showing off the casts on their arms or legs.

The most famed (and feared) group of this genre was the Encounter group, lead by Teertha (Paul Lowe), who had been a therapist of rank and name back in England before becoming a sannyasin. Generally, he was seen as Osho’s chief disciple, and in accordance with that he moved around the ashram in a very dignified manner. In discourse, he had his customary seat in the center of the first row, right in front of Osho, it was him that read out the sutras at the beginning of the discourse, and many of us thought that he was “almost enlightened”. In any case, he was one hell of a good group leader, notwithstanding of what might have become of him later on. The ashram prided itself to be offering the “toughest encounter group in the world,” and, even in a buddhafield, this needed a very capable guy to run it.

Tao, now, was one of ‘those’ groups. During the first session the eighteen of us were sitting in a circle, with the group leader, a gnarled, woodsman-type Californio named Amitabh in the center, and I can still hear his opening remarks, “Guys, everybody here is fucked up, and I’m the most fucked up – that’s why I’m the group leader!” And off we went. There was a considerable amount of fighting and screaming (the Germans really went for it there, for them, it was constantly “Scheisse, Scheisse!”), but we also had more quiet sessions with subtle energy work.

There was a Swiss lady who was so much of a case that she had to be exorcised, and there was this cute chick from Munich who had such a hate-thing going with me that a few times, ignited by a remark or a grin from me, she came charging right across the room in an attempt to tear my eyes out. (Eventually, Amitabh ‘turned’ her, and we became good friends, for many years.) What was quite an interesting revelation to me was that, with the kind help of the other participants, I became acquainted with somebody I had not dared to be confronted with before, had hardly known he existed in the first place: Bodhena, the asshole. Hm!

All in all, I finished the group somewhat wiser, with a cracked rib (that was re-cracked in another group a few weeks later), and I was so hoarse from screaming that I was barely able to whisper.

Within a short time, the groups, together with Dynamic and Kundalini, Osho’s classic active meditations, began to show their effect. Most notably, there was this incident when I was having an argument with some lady at the apartment I was sharing with a few other sannyasins. All of a sudden, I felt this surge of energy rising up from my belly, an energy I had never felt before. Wow, it looked like I was now capable to really get angry, and not only be in my head about it. Now, that’s what I call progress!

After all, group leaders at the ashram claimed that in this environment within a short time therapeutical successes could be achieved that would take months or even years under more ‘normal’ circumstances. It was the combination of therapy and meditation, plus Osho’s energy and guidance that did the trick. For starters, a lot of garbage was thrown out that had collected over years, over lifetimes. There is nothing wrong to get a dysfunctional ego back into whack, but this was not where the work stopped, this was where it really started for Osho. He had said once that “you may think you’ve come here for your problems, but I’m cooking something else.” And what that is I am still continuing to discover today.

Bodhena took sannyas in the late seventies in Pune where he worked first as a handyman for the group department, then as a Krishna Guard. After living in Geetam for a few months, he was invited to the Ranch where he worked in construction, security, Magdalena Cafeteria, Chaitanya (accounts) and as a paralegal at Rajneesh Legal Services. In early Pune II he worked for the Rajneesh Times, and then again as a guard at Lao Tzu House. In recent years, he has been living in Clausthal, Germany, practising nowhere to go and nothing to do. bodhena (at) hotmail (dot) com

Why the Law of Attraction doesn’t work

Transforming the Big Muddy into an oasis