In the Girls’ Room with Big Prem

from Punya’s memories in Saswad…

My bed and my few belongings, stowed away in the drawers on castors, was eventually shipped to the castle and placed in the last empty space of the ‘girls’ room’. It was the square room at the left end of the east wall. From the rings in the walls and the narrow slit windows into the valley, a visiting male had concluded that it must have been the cannon room.

At night I hooked up my mosquito net to feel some kind of privacy. I enjoyed falling asleep with the little noises in the room. It felt like being part of an extended family or a tribe in harmony.

On my right was Big Prem’s bed. She had left Pune for Saswad a few weeks before, leaving behind her boyfriend Rakesh. Every morning she received the tape of the darshan of the previous night with the first shuttle. Seated cross-legged at a low table between our two beds, headphones clamped over her head, she typed it off at supersonic speed. She told me that many of the typewriters had broken down as they were not fast enough to catch up with her fingers. I would have enjoyed listening to Osho’s words, but that was not allowed….

The flawless manuscript plus copy went to Maneesha, the editor of the darshan diaries, who slept and worked in and on the bed right next to Prem, across from the narrow split window with the view onto the plains. Maneesha, as well as Savita, who had a room just along the balcony, had been living in Osho’s house for many years and had been mediums for the energy darshans. That these hitherto unbreakable arrangements were now disrupted was disconcerting for quite a few people, not just for them.

Pankaja, the English novelist who had been my next door neighbour in Jesus House, had her bed in the corner diagonally across from the door. And next to her was Hari Chetna, Chaitanya Hari’s former girlfriend and – as I heard later – a former actress who had worked under the name of Mascha Rabben in some of the Fassbinder movies. She had arranged a colourful corner with saris and shawls around her mattress on the floor.

Asmito’s mattress was hidden by the clothes hanging on a pole over the staircase leading to the room downstairs (we used it just once for a prank to frighten Nirved in the middle of the night). Asmito was actually a man but fitted well with the female energy of our room. He had come to Saswad to be in charge of the soap department.

Sometimes he played the guitar at night. It was like a lullaby, mingled with Hari Chetna’s giggles and Big Prem’s whispers. A candle was lit to read her lover’s letter for a second time. The cool moonshine cut through the open door. I fell asleep blissfully as part of a family; joined to everybody else – as children like to fall asleep, surrounded by loving people, reassuring voices – not disconnected, alone in a room. For many years to come I missed this secure, womb-like feeling when going to sleep.

Excerpt from ‘On the Edge‘, by Yoga Punya 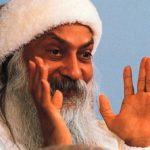 Big Prem – You Are Simply Big

Feel the danger before it comes

Why we got the guns?