Nobody Listened to Wilhelm Reich

Osho on prana, yogis, and the accumulation of orgone

Wilhelm Reich (24 March 1897 – 3 November 1957) was an Austrian psychoanalyst, a member of the second generation of psychoanalysts after Sigmund Freud, and one of the most radical figures in the history of psychiatry. He was the author of several influential books and essays and his promotion of sexual permissiveness disturbed the psychoanalytic community.

He moved to New York in 1939, in part to escape the Nazis, and shortly after arriving there coined the term “orgone” – derived from “orgasm” and “organism” – for a cosmic energy he said he had discovered, which he said others referred to as God or ether. In 1940 he started building orgone accumulators, devices that his patients sat inside to harness the reputed health benefits, leading to newspaper stories about sex boxes that cured cancer.

Following two critical articles about him in The New Republic and Harper’s, the U.S. Food and Drug Administration obtained an injunction against the interstate shipment of orgone accumulators and associated literature, believing they were dealing with a “fraud of the first magnitude.” Charged with contempt in 1956 for having violated the injunction, Reich was sentenced to two years in prison, and in June and August that year over six tons of his publications were burned by order of the court, one of the most notable examples of censorship in the history of the United States. He died in jail of heart failure just over a year later, days before he was due to apply for parole.

[…] So the first thing about today’s sutras is the discovery of prana. That became the very foundation of the temple of yoga. You are breathing. Yoga says you are not only breathing air; you are also breathing prana. In fact air is just a vehicle for prana, just a medium. You are not alive by breath. Breath is just like a horse, and you have not looked at the rider yet. The rider is prana.

Now many psychoanalysts have come across this mysterious thing – the rider who is coming on the breath, going on the breath, continuously moving in and out. But yet in the West it is not a recognized scientific fact. It should be because now science says matter is no longer there and everything is energy. The stone, the rock, is energy; you are energy. So there must be happening many energy games within you, tides and ebbs of energy.

Freud stumbled upon this fact. I say “stumbled upon it” because his eyes were not open; he was very blindfolded. He was not a yogi. He was again caught in the scientific attitude of making everything objective. He called it “libido.” If you ask the yogis they will say libido is prana ill. When prana is not vital, when somehow the energy of prana has become dammed up, blocked; that’s what Freud has come to know. And that’s explainable because he was working only with ill people, neurotics, mad people, mentals. And working on ill, mentally disturbed people he came to know that their bodies are carrying some blocked energy and unless that energy is released, they will not be healthy again. Yogis say libido is prana gone wrong. It is just a diseased prana. But still Freud stumbled upon something which later on can become very, very significant.

Wilhelm Reich died in a prison.
It seems humanity
is not going to learn
anything from history;
it goes on repeating the same,
again and again.

And one of his disciples, Wilhelm Reich, went deeper into it, but he was caught by the American government because he could not prove very scientifically, that is very objectively, what he was saying. He died in jail as a madman, certified as mad. He was one of the greatest men ever born in the West. But again he was working blindfolded. He was not yet working as a yogi has to work. The scientific attitude was his undoing.

Reich tried to make contact with this energy the yogis call prana, and he called it “orgone.” “Orgone” is better than “libido” because “libido” gives a feeling as if all is sexual energy. “Orgone” is a better word, more inclusive, more comprehensive, bigger than “libido,” and gives a possibility for the energy to move beyond sex or to touch higher realms of being which are not sexual. But he got into trouble because he felt it so much and he observed so much that he started to accumulate the prana energy, the orgone, in boxes. He made orgone boxes. Nothing is wrong in them; yogis have been working on that for centuries. That’s why yogis try to live in almost boxlike caves, with only one small door.

Now those caves look very unhygienic, and how did they live there for years? No air goes in because there is no cross ventilation. So dark, dingy, and yogis have lived so perfectly and so healthily that it is almost a miracle. What were they doing there and how were they living there? According to the modern scientific ideology they should have died, or at the most they should have lived as very ill people, depressed; but yogis have never been depressed. They are one of the most vital people to come across, very alive. What were they doing? What was happening? They were creating orgone, and for orgone to stay in a particular place, cross ventilation is not needed; in fact cross ventilation will not allow the orgone to accumulate because once the air comes there the orgone energy is a rider – it jumps on the air and moves out. No air passage is needed; then layers upon layers of orgone go on accumulating, and one can thrive on it and live on it.

Wilhelm Reich created small orgone boxes, and he helped many ill people. He will tell them just to lie down in the orgone box, and he will close the box and tell them to rest; and within an hour the person is out, feeling very vital, alive, tingling all over with energy. And many people have reported that their diseases disappeared after a few experimentations with the orgone.

Buddha says:
If truth
can produce effects
it is true.

The orgone box was so effective that without knowing the laws of the country and without bothering about them, Wilhelm Reich started to produce them on a mass basis and he started selling them. Then he was caught by the Food and Drug Administration and he was asked to prove it. Now it is difficult to prove because the energy is not tangible. You cannot show it to anybody. It is an experience; and a very inner experience.

You don’t ask Albert Einstein to show electrons, but you can believe in him because you can go and see Nagasaki and Hiroshima. You can see the effect; you cannot see the cause. Nobody has yet seen the atom, but the atom is, because it can produce effects.

Nobody has seen the atom, but we have to believe it because of Nagasaki and Hiroshima. But nobody listened to Wilhelm Reich and his patients. There were many who were ready to certify, “We have been cured,” but this is how – once some attitude becomes generally accepted – people become blind. They said, “All these people are hypnotized. In the first place they must not have been ill – or they have imagined themselves cured – or it is nothing but suggestibility.” Now you cannot go and tell people who have died in Hiroshima, “You have imagined that you are dead”; they have simply disappeared.

Just see the thing: death is more believable than life.

You go on
killing people
who have been affirmative,
life enhancing.

And the whole modern world is more death-oriented than life-oriented. If you kill a person you will be reported by all the newspapers; you will become a headline. But if you revive a person, nobody will ever come to know about it. If you murder, your name becomes a famous name, but if you give life to people, nobody is going to believe in you. They will say you are a charlatan or a deceiver.

That has always been so. Nobody believed Jesus; they killed him. Nobody believed Socrates; they killed him. They have killed even a very innocent man like Aesop, the famous story teller. He never did anything, he never created a religion or a philosophy, and he was not saying anything against anybody. He was just creating a few beautiful parables. But those parables offended people because he was saying such great truths in those parables and in such a simple way that he was murdered.

You go on killing people who have been affirmative, life enhancing. You ask for proofs.

Swabhav is here. A few years before, he came with his two brothers; all the three had come to argue with me. And Swabhav was the most argumentative of all the three; but he is a sincere man, and simple. He became by and by convinced. He had come as a leader with the other two brothers; then he became convinced. Then the other two became against him. Now they say he is hypnotized. They have stopped coming; they won’t listen to me. Now they are afraid: if Swabhav can be hypnotized, they can also be hypnotized. They avoid, and they have created a protective defense mechanism around them. If I can convince another brother – because I know one can be convinced still – then the remaining one will become more defensive; and then he will say, “Two brothers gone.” And the remaining one is also very good-hearted; there is a possibility for him also. Then the whole family will think all the three have gone mad.

Many people, very intelligent people, PhD’s, professors, psychoanalysts – certified – but the court wouldn’t listen. They said they are all conspirators in the same game. “Show us where orgone energy is! Open the box and let us see where it is. It is an ordinary box, there is nothing. And you are selling it, deceiving people, cheating.”

Wilhelm Reich died in a prison. It seems humanity is not going to learn anything from history; it goes on repeating the same, again and again.

If I say I am God, it becomes an offense. I am simply saying that you can also become gods, never settle for less. But you feel offended. And you are living only two percent of your possibilities; ninety eight percent of your possibilities are being wasted. As if you were given a hundred days to live and you lived only two days and died. Even your great thinkers, painters, musicians, geniuses, they live only fifteen percent of their potentiality.

If you can blaze to your utmost, you become a god.

Read more articles on Osho News about Wilhelm Reich and his work
Read the full story of his life on www.wilhelmreichtrust.org

Who Is Afraid of Wilhelm Reich? 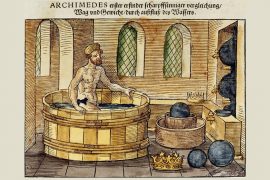 The two ways to approach reality