In a Dancing Bubble

Meera participates in the Osho Golden Childhood Tour 2016, visiting the places where Osho grew up, studied and gave lectures as a professor.

Osho moved into my heart two years ago during a meditation camp with Anadi. The following year Anadi invited me to join the Osho Golden Childhood Tour. He had started these tours many years ago after reading Osho’s book Glimpses of a Golden Childhood. Coming from the same area, he knows the places where Osho spent his life up to the age of 40 very intimately, as well as the people who were close to Osho. Having just turned 40 myself, I joined happily.

After I arrived by plane in Mumbai a shared taxi brought me to Pune. Three days of meditating in the tropical Osho International Meditation Resort dissolved the jetlag and melted away the European winter. Osho’s magic took me further on my inner journey, my heart expanded and my head became silent. I was feeling high. Afterwards, during the entire tour, I found myself being present and in a let-go state at the same time.

We arrived in Delhi by plane and stayed overnight at Oshodham where we joined a few meditations in their beautiful Buddha Hall. After a good night’s sleep we set off to Agra. My eyes filled with tears when I got my first glimpse of the Taj Mahal. “This is home,” I heard inside myself, “it was built at home and descended on earth – just go in and come back home.” ‘Home’, nirvana or enlightenment, did not happen. When I came out of the building I was back on earth to continue my travels.

Next we were on a night train to Khajuraho and a taxi brought us to Hotel Harmony where we met Ganga. It was a sheer delight to hear him tell the most beautiful stories about the times that he met Osho. He was a teenager when Osho lived in Jabalpur, from where Osho used to visit Khajuraho every now and then. My favourite story is the one about the cup and saucer! I cannot write it down here for you; you have to hear it from the horse’s mouth! While visiting the temples he shared with us the hidden meaning of the Khajuraho temples as Osho had told him. Osho had also introduced him to the great master Gorakh. The disciples of Gorakh used to whirl there, so when we were sitting silently inside the temples we could still feel the amazing spinning energy.

After four days in Khajuraho we hopped on a fancy private bus which was going to be ours until the end of the tour. It was a comfortable, air-conditioned 12-seater, technically quite advanced because on the road we could listen to Osho music and Osho’s discourses via bluetooth! We had a very friendly, young driver and his charming wingman who helped us in and out of the bus and hauled some of our luggage.

In Sagar, the town where Osho studied at University, we were introduced to the remains of the tree from which Osho fell while meditating. Osho told us in discourse that his spirit detached from his body and was unable to get back not until a woman passed by and touched his head. After that he tied himself to the tree with a rope when meditating! We also searched the well in which Osho threw his gold medal, but could not find it…

The next day the journey continued to Kuchwada, the small village where Osho was born. It was very hot and some of us had umbrellas to protect themselves from the scorching sun while we crossed the field from Osho Tirth ashram, where we were staying, to the house of Osho’s grandparents where Osho was born and where he lived till the age of seven. We visited the house and meditated in the room in which he had arrived on this planet. Sitting there silently, my third eye started pulsating strongly, shaking my head subtly back and forth. It was quite an experience.

Just as Osho had done seventy-eight years before when he travelled on a bullock cart with his dying grandfather, we crossed the Narmada River and arrived in Gadarwara, in our faithful bus. We came to the house where Osho lived with his parents, sisters and brothers until he went to University. We sat down in his teenage bedroom, Anadi told us some more stories about Osho and together we sat in silence. His Nani’s (grandmother’s) house used to be next door but did not survive the test of time.

A little further down the street, after passing Anadi’s birthplace, we visited Osho’s father’s cloth shop which is still run by the family. We received chai and some of us bought beautiful sarees. Of course I also had to buy one, actually two, but because I found them too difficult to wear, one of them is now flowing softly in the morning breeze as a curtain in front of my bedroom window; I am reminded of Gadarwara as soon as I open my eyes. Around the corner we spotted the gate through which Osho once entered his primary school – on an elephant! We, however, walked in on foot and were welcomed in Osho’s classroom by wonderful children. It was a sheer joy to be there.

A classmate of Osho, Shukalji, enchanted us with his presence more than once, first at his home and later at a charming temple built by sannyasins in the middle of nowhere where they could do Osho Dynamic Meditation undisturbed and closer to home than the more distant Osho Leela ashram. Just being with him made me feel so happy. I could not stop smiling and I felt little twinkling stars all around me. Shukalji shared with us some wonderful stories about hanging out with Osho as a kid. Later he sat with us in the Evening Meditation at Osho Leela where we would be staying for the next couple of days.

A ten-minute walk from the ashram brought us past Osho’s house down to the river. Osho has talked about this river so lovingly. We walked along the shore for some 20 minutes until we arrived at his favourite spot. I was in bliss just to sit there and watch the local boys jump in and swim across the river very much like Osho used to do. When the previous morning we were sitting at the school desks in Osho’s classroom I had noticed that nothing appeared to have changed in over sixty years: his desk with its ink well hole was still there. But I knew that Osho was rarely there. The attraction of the river was too strong.

A little older, Osho preferred to jump from the towering railway bridge into the mighty monsoon river a little further outside town. After a visit to a charming little ashram run by some sannyasin friends a 30-minute stroll brought us to the nearly dried-up river from where we could see the impressively high railway bridge.

After three days we left Gadarwara to reach the Marble Rocks in time for full moon! It would have been just a few hours’ drive, but it took us the whole day because we met some lovely sannyasins on the way and were invited to their houses and even treated to a bansuri flute concert. Osho loved to sit by the white marble mountains which enfold the deep river, especially around full moon nights. After a boat ride we arrived at his favourite place, the river so silent, a perfect mirror in this mystical full moon night. The next day, on our way to Jabalpur, we saw the rocks and the river again, but now bathing in sunlight. We jumped in – yahoo!

After half an hour we reached the Osho Jabalpur ashram where we were going to stay next. It was among the Black Rocks and was created, at Osho’s request, by Osho’s childhood friend Vijay. In Jabalpur we visited and meditated under the maulshree tree, the same tree under which Osho sat that night, 21 years old, when for him the whole universe became a benediction. Next stop: the University where Osho lectured as a philosophy professor. We were welcomed by the staff and taken to the auditorium which used to be packed with students when Osho spoke.

Our tour could not have ended in a more beautiful way than to be invited by Osho’s youngest sister, Nisha Didi, for chai and biscuits. Her presence touched me deeply; I saw such grace, harmony and beauty. We were welcomed with so much love and joy by her whole family; her husband Harak Bhai, three grandsons, two sons and their wives. They shared the family photo albums and their memories of Osho. It was so good, so wonderful; what a blessing.

After spending four days at the Marble Rocks and in Jabalpur, we left by night train heading to Mumbai. The following day we took our international flights in various directions.

Never before had I experienced such a magical tour. It had felt as if I had been moving in a dancing bubble, filled with Osho’s silence and love, encompassing all and everyone on their path – a rare intimate encounter with the master.

Meera became a sannyasin in 2014. Over the past two years she has been assisting Anadi in more than twenty-five Osho Meditation camps in Europe. She helps out with the organisation of meditation weekends, vacations and tours. She loves travelling and going on her inner own journey, as well as taking pictures, creating websites and writing an occasional poem. Previously she worked for an international child rights organisation for which she travelled around the world. The next Osho Golden Childhood Tour will be on 25th January – 14th February 2017.

Related articles
A Date with Death and God: March 21, 1953 – Osho speaks in detail about the insights and events leading to his enlightenment
The Maulshree Tree March 21, 2011 – Bhagawati experiences the maulshree tree in Jabalpur under which Osho became enlightened
Visiting Osho’s Birth House in Kuchwada – Bhagawati continues her journey from Jabalpur to Bedhaghat and on to Kuchwada

A Love Letter to Humanity

Everything Became an Effortless Flow 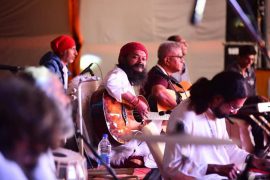