A junior devil was worried when he saw Jesus

“Once a religion is organized, it is dead,” says Osho. From our series 1001 Tales, compiled by Shanti.

Let me tell you one anecdote:

A junior devil has been sent to Earth to look around and see how things are progressing.

He quickly returns to Hell, horrified, and obtains an interview with Beelzebub, the chief devil himself.

“Sir,” he sputters, “something awful has happened! There is a man with a beard walking around on Earth, speaking Truth, and people are beginning to listen to him. Something has to be done immediately.”

Beelzebub smiles pleasantly, puffing on his pipe, but making no comment.

“Sir! You don’t realise the seriousness of the situation,” continues the distraught junior devil. “Pretty soon all will be lost!”

Beelzebub removes his pipe slowly, taps it out on the ashtray and sits back in his swivel-chair, hands behind his head.

“Don’t worry, son,” he counsels. “We will let it go on a little longer and, when it has progressed far enough, we will step in and help them to organize!”

Quoted from Osho, The Discipline of Transcendence – Discourses on the forty-two sutras of Buddha, Vol 3, Ch 5

All excerpts of this series, compiled by Shanti, can be found in: 1001 Tales 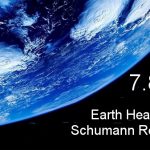 Why Is Earth’s Schumann Resonance Accelerating?

You too are that