When it rains, it pours

In water-deficient hilly territory, SOS Organics manages to run on its own steam, writes Anjuli Bhargava in the Business Standard, India. Published on July 1, 2019.

On a November 2017 trip to Kumaon, I happened to visit the charming workshop of SOS Organics. In terms of workspaces, it beats most I’ve encountered. Located at 6,000 feet atop a verdant valley with a view of the Nanda Devi range that on clear days seems menacingly near, the place created by the two founders Santosh (a German by birth and Indian in spirit!) and Amrita is to be envied. 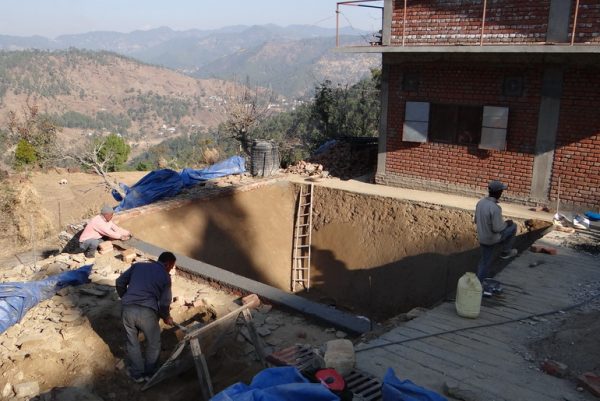 But what really stayed with me during my long chat with them — besides their fascinating previous life as Osho sanyasins who travelled with Rajneesh to his man-made paradise in Oregon — was how they had built water storage tanks. They harvest rainwater that reaches the tanks through pipes, is cleaned by alum and meets their annual needs of 200,000 litres quite comfortably. Although soap-making (soap is one of their main products) is a rather watery business, they have actually managed to cut off the regular civil supply and the enterprise runs on its [own] steam.

With Chennai’s water crisis unfolding before our eyes, we can no longer ignore the urgency of rainwater harvesting. The ground water table in several places is falling. There is no scientific method of recharging the ground water reserves.

Santosh confirms what I fear. The government and authorities in the hills aren’t doing anything to recharge the water sources. No change in the crop or trees mix to preserve water is being contemplated at a macro level. Whatever little is being done is done by local NGOs and worried individuals.

Almost two years after my visit, I ask Santosh for details of how they managed what they have. And with German method and precision, he didn’t just respond. He sent me a detailed step-by-step guide on how easily what they have done can be replicated in every hilly region of the country although I don’t see why it cannot be done in the plains as well especially by those who are living in houses with some available land. Almost every house in any large colony in Delhi or other cities which are not land constrained like Mumbai can for instance harvest rainwater and become self-reliant if people decide to put their mind to it.

The SOS duo actually worked backwards. At the start of their venture, they decided not to be dependent on anyone for their water and electricity needs. Four tanks were built that hold 200,000 litres between them. Each tank is built at a cost of roughly Rs 25,000 per tank lined with food grade LDPE plastic. Pipes connect the tanks to the rooftops and the water is used for all purposes other than drinking and cooking. This year, pre-monsoon, there is 60,000 litres of water to spare, which they will be sharing with locals to reduce dependence on water tankers.

The roof is made of solid corrugated sheets, is non-corrosive and can take fairly severe accidental impact. The tanks are, by and large, maintenance-free and don’t need to be opened once built. A tiny amount of alum, a natural mineral, is used to cleanse the water. A hand pump is used to access the water, which can be located anywhere.

The beauty of SOS’s water harvesting system is that it can be done in record time. The four tanks were built over three weeks by three labourers with one supervisor. If the government could provide the financial support needed by each household in the region, the villagers could quite easily build the tanks. Twelve such tanks have already been built in the area and there is now a local team that has the expertise to do the job for anyone keen to replicate the rainwater harvesting system they have adopted.

When I visited SOS, the two founders were looking at ways of becoming self-reliant for their electricity needs. Due to a large number of trees on their property — which they refuse to cut — the access to sunlight was limited. I learn that roof panels not covered by trees have now been fitted with 57 solar panels and the property works with two 7.5 kilowatt solar inverters. Slowly but surely, they hope to generate enough electricity for their needs and cut off the regular supply just as they have with water. In other words, this small but highly well-run enterprise with a turnover of Rs 1.2 crore annually will be run without any dependence on municipal supplies.

Spring water is collected and stored and used for cooking and consumption. I get a glass of cool water when I visit and it tastes divine. A snow covered mountain range within touching distance, green cover as far as the eye can see and spring water to drink through the year. If that’s not a life to be envied, what is?