Experiencing the music on The Jungle Sessions is like being immersed into an easygoing tropical idyll – warm, convivial, relaxing. It’s the perfect balm for our troubled, uncertain times. The best kind of balm, actually, for the respite it offers is one of mindful awareness – a musical celebration of life’s joy and beauty written during lockdown.

Like so many around the world, singer / songwriter / guitarist Miten had to shelter in place in early 2020. That put an end to the nearly non-stop touring he had been doing as one half of mantra music’s beloved power couple, Deva Premal and Miten, whose artistry has been inspiring, energizing and enrapturing the yoga / meditation / wellness community since the ’90s. But now Covid and karma had landed the couple amid the verdant beauty of the Costa Rican jungle at the bucolic Blue Spirit Meditation Centre. There they turned the lockdown into a restorative time of meditation, reflection and of course musicmaking. The splendor and serenity of the natural surrounding began seeping into the set of songs which would emerge as The Jungle Sessions.

Miten’s incisive songcraft, earthy voice and supple guitar work are the main focus of the album – the third in a trilogy that includes his previous solo discs Temple at Midnight (2016) and Devotee (2019). But his beloved musical and life partner Deva was also integral to the creation of The Jungle Sessions, her dulcet voice is woven throughout this gemlike set of tracks.

Their musical heartplay is at the core of the album’s opening track, ‘Rain of Blessings / Ra Ma Da Sa’. When an enormous thunderstorm broke out during a group meditation session one day, Miten took it as a blessing rather than an interruption or distraction. He captured the beauty and magic of the moment in a song. Gently plucked strings create a hushed, hypnotic pulse over which Miten sings tuneful stanzas of gratitude, joy and wonder. Deva provides the melodic counterpart with a graceful setting of the Sikh healing mantra Ra, Ma, Da, Sa. It makes for a perfect yin / yang symmetry, as the two themes and the duo’s layered, love-matched voices intertwine.

Miten takes center stage for the next five tracks on The Jungle Sessions, which, like all the songs on the album, were created with producer, multi-instrumentalist and frequent Deva and Miten collaborator Joby Baker. Recording took place in the El Silencio meditation room at Blue Spirit. Like much of Miten’s solo work, these songs are grounded in his deep roots in the singer / songwriter genre. As such, they draw more broadly from pop music influences than his more mantra-based Deva and Miten body of work.

An understated reggae feel underpins ‘Om Shanti’ and ‘I Need a Beach’. The former finds Miten singing out for the Earth’s downtrodden and unfortunate, “singing out from the power of love,” in a lyric that seems cut from the same cloth as the Bob Dylan classic ‘Chimes of Freedom’. And ‘I Need a Beach’ is the cry of a man seeking refuge from a troubled world. An undercurrent of deeply felt emotion runs throughout Miten’s relaxed vocal delivery.

‘Still Awake’ is a tour de force of lilting acoustic guitar balladry, complete with an opulently warm-hued orchestral arrangement. There’s a sweet, gospel-inflected r&b vibe to ‘Never Give Up On Love’. while ‘Just a Little More’ boasts a brassy Stax-inspired horn chart. Baker’s soulful Hammond B3 organ work provides a key sonic touchstone on many of the tracks. Miten’s own nimble electric and acoustic guitar rhythms underpin the entire album, punctuated by lyrical solo passages that sparkle like sunlight.

The album concludes with a stripped-down, live reprise of the opening track, ‘Rain of Blessings / Ra Ma Da Sa’, Miten and Deva’s voices intertwining once again, calling us back to our hearts, back to love, back to the grace to see miracles and beauty, even in adversity.

The Jungle Sessions constitute a welcome addition to the catalog of stylistically diverse and always impeccably crafted music that Miten has created both as a solo artist and in tandem with Deva Premal. 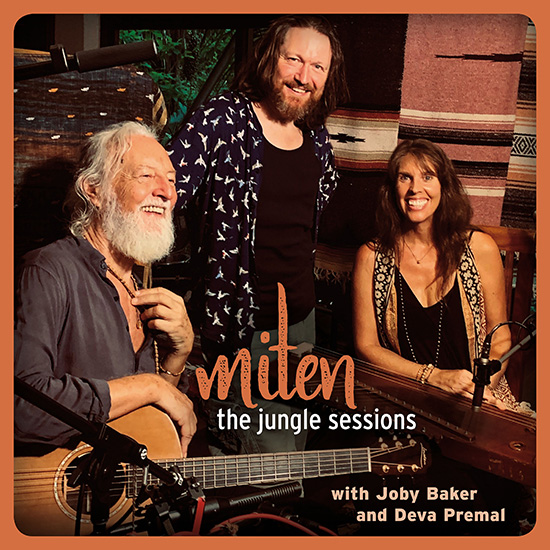 The Tarot of the Traveller: The 10 of Spades

14 Peaks: Nothing is impossible