Fatima’s discovery of Osho’s meditations continues with Nadabrahma, the sound of Brahma

Three icy fingers touched my bare shoulder and ran a shiver down my body. “Wake up Ma. Get ready for Nadabrahma,” a voice whispered in my ear in the tone of a conspirator. As if the meditation was a well guarded secret between her and me. Opening my eyes reluctantly I met a long face with deep set blue eyes. The Ma grinned, rested her broom aside, and helped me sit up. She had come to mop the Buddha hall clean after Osho’s taped discourse.

Nadabrahma, in my pathetic Sanskrit, translates literally to “Sound of Brahma”. Buddha, the gentleman, was sitting silently watching his breath in his Vipassana. Nataraj, the dancer, was reeling his way into divine ecstasy but kept his mouth shut. What then is this Brahma making noises about? The Hindus believe him to be the creator. Not of sound but of the world we live in. Looking at the kind of world he has created, he should shut up forever. But no, he refuses to keep mum and makes himself heard in the Buddha Hall day after day for one full hour! The hissing voice owes me an explanation.

Rapid splashes of orange started to fill the hall. And the voice usurped the mike. This meditation, like the others, runs into four stages, it said. The last, of course, is going horizontal over the cold floor. 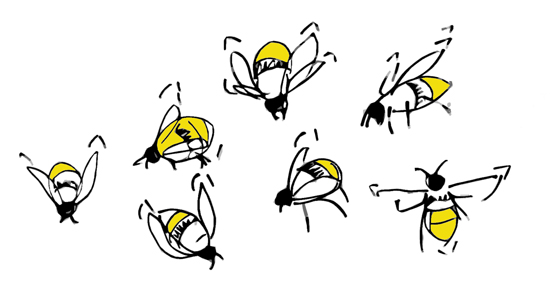 “In the first phase you should hum like a bumble bee!”

I thought I was here to go forward in my evolution. Not to retrograde by thousands of years to a bumble bee again. Honestly! The hiss did not stop there.

“Become a hollow bamboo. And let the humming pour into it.”

Me, a hollow bamboo?  With my curvaceous, sensuous body that sets every male eye on fire! How can I ever be a straight-lined, vertical hollow?  Impossible. I would rather forgo my spiritual evolution than look like a hollow bamboo. Thank you very much.

As the gong rippled the still air, divine music broke out. And struck a deep chord in my heart.

I went total with the intoxicating notes and started to hum.
The hiss had advised us to fluctuate the pitch of the hum. Not to keep it monotonously even. I went from the barely audible to slightly loud to very loud. Starting with one bumble bee, then two, three. Then a swarm. Bees of every species, bumble, honey, queen congregated in my head and made a droning hive of it. Did I hear the wild buzzing of a wasp as well? The humming grew from decibel to decibel and soon became a resounding din in my head. This must be Brahma at his noisiest best! I felt the swarm nibble at my brain and chew up many of its thoughts.

When the droning soared and dizzied my head the music stopped.  And off flew the swarm with the cobwebs of my head. Leaving it clean swept, dusted and wiped.

The next stage was a slow movement of hands from the navel outwards. To embrace the space in a semicircle and return to the navel. The music was enchanting as always. Seven and a half minutes later it was the same movement in the reverse direction.

This meditation brought me as much tranquillity as did Nataraj. I almost tip-toed into Vrindavan and settled for a cup of hot tea to counter the hot afternoon and something sweet to match my mood.

As I approached the monopolized table I saw the big handed, big footed Swami at it and not its owner. I hesitated and was about to walk past him when he smiled and beckoned me to the vacant chair.

“How did you enjoy Nadabrahma?”

“Simply wonderful. I still hear a joyful humming in my head.”

“So you loved your Nadabrahma,” I heard the Ma’s soft voice. She pulled in a chair and joined us.

“It is actually an old Tibetan technique done in the early hours of the morning,” she said.

“Osho says it is a mantra meditation, and mantra is one of the most potential ways. It is very simple yet tremendously effective, because when you chant a mantra or you chant a sound your body starts vibrating; your brain cells in particular start vibrating.

“He further says that Nadabrahma means the creator and his creation are nothing but sound.”

I was overwhelmed as always by an Osho quote.  She gave me a soft, Belgianly sweet look and said, “You must take sannyas. With Osho’s mala around your neck you will feel very connected to him. And that connectivity is a blessing.”

She held my hand, waited a while and said, “Don’t miss Kundalini.” 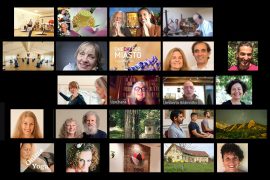 Are online events here to stay? 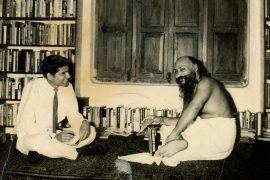