Between Poona 1 and the Ranch Osho was at The Castle in New Jersey. This was a turreted mansion on a hilltop with a view to the New York skyline.

He took two drives a day, morning and evening, in his Rolls then; and each time two people would be invited to come along. They would be notified well in advance to give them time to bathe, brush teeth, wear clean clothes.

One evening we had all gathered outside the house to wait for his appearance. The car was there and Nivedano led the musicians in playing; we all clapped and sang.

Suddenly I knew that he was going to ask me to come along tonight – though I had not been notified. And I was horrified – my teeth were unbrushed since dinner, I had not bathed, my hair was a mess. And to top it off, my trousers would not zip – a bout of severe dengue fever in Poona had left me very thin and since arriving at the Castle I’d been eating the delicious food in abundance. My pants were sort of slyly open, under a t-shirt.

He emerged from the door at the top of the steps. And then he said softly, almost too low to hear – “Madhuri?” And he looked at me.

So I went to the car, and was shown to the back seat next to a guy from accounting; Vivek sat on the other side of him.

Osho drove and beside him was his doctor, a cuddly-bear American whose name I forget.

Rapidly it became dark. We swung out onto the freeway. We were going fast.

Nobody said a word. In fact, during that entire drive only one thing was said – and that by Osho. He was accelerating – yeah, we were, like, speeding – when we passed a white car with a woman driver. She glanced over at us, with a disturbed look of surprise. Then we zoomed far ahead.

What went on inside a poor mortal in that hurtling metal can was quite another thing. I was sitting not two feet away from him for an hour and a half, and my mind went nuts. It bounced about the inside of the car like alphabet soup. It was noisy as hell, and its content was mortifying. It obsessed about what my unbrushed teeth might be doing to offend his nose. About how gross it was to ride with him with unbuttoned corduroy trousers. About how of course he could hear all this crap my mind was shouting. It seemed to me he was the unwilling witness to what people do in their bathrooms when nobody is watching. Oh lord, what I felt was thorns and brambles and shame.

The ride was amazing, in fact. The smooth projectile force flattened us back in our seats as gravity climbed, spaceship-style. His presence… well, you know. It kind of just creams your brains, whatever of them are not resisting like mad. It was epic, it was enchanted, magic, transported. All that too…. It was… sensual. Immensely.

When we returned to the Castle everyone piled out. As usual the passengers were giggling, careening, high and giddy. Osho, of course, stepped sedately, smiling, apparently delighted with the fun of the jaunt.

I fell out crouched over and kind of crawled to my pallet in a turret, feeling like I’d been run over by a truck. For the next few days any chance I got I went there and lay down. I was totaled, smashed. I didn’t know why. I was ashamed of what had come out from under rocks and paraded itself in front of him in the intimate ether of the vehicle. And most of all scared witless of my Master. Scared of what, I cannot tell you even now.

I stayed scared for about four years. At the Ranch I could not look at his eyes during driveby. I could not wave my arms around and go ga-ga. I stood behind others, waiting for it to be over. You can imagine that I carried this too as a secret shame!

Only the last year at the Ranch did this change. I was with Subuddha, who was always running around with other women. While I was exiled in Portland making beds in the Hotel he was having an affair with a delicate little Irish girl. Oh, how my helplessness burned! So I got into my rage. I imagined that the buckets I carried for cleaning bathrooms were filled with blood and severed heads. I really imagined it, ‘til I felt the delight of mayhem and carnage to my toes. I did this sort of thing all day, for two weeks. Lots of fear of all sorts vanished.

Including my fear of Osho. And shortly before the end of the Ranch I was invited to Buddha Grove for a press conference, and danced on the path where he was walking in.

Musicians were playing that wonderful Gypsy violin. I danced with a whole heart, body, soul – danced til I was a throbbing nothing in a sea of blasted-out bliss. And he stopped and danced with me – on and on, and every time I opened my eyes he was still there, shaking his hands together and pumping up the volume, all wicked and wide-eyed and full of mischief. 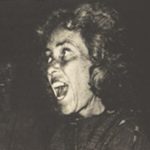 The call of the willow tree