Navyo’s journey continues: to the eternal city of Rome… 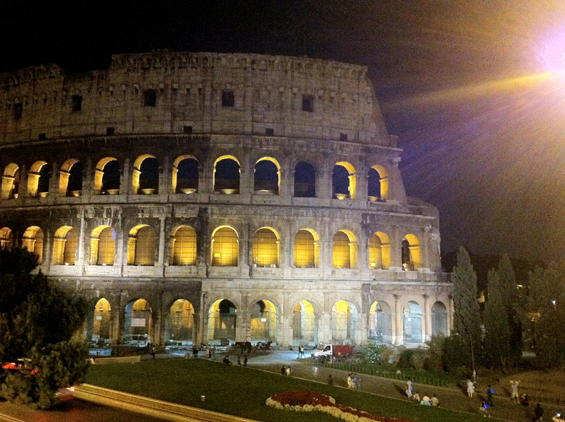 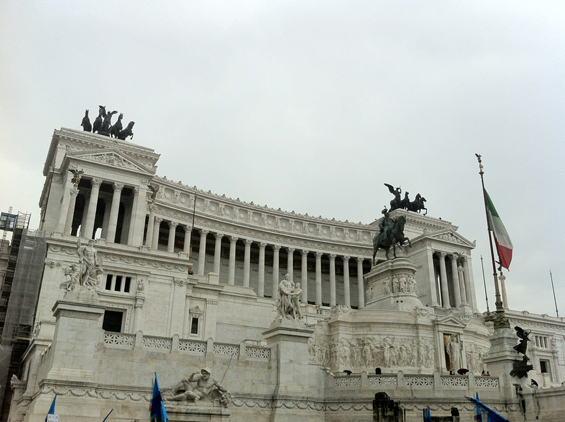 I pull into Roma Termini from the relative calm of Firenze and am catapulted out of the train station into the heat of the streets. I’m hoofing it down Via Cavour to my host’s flat a block from the Colosseum. I’ve been riding in air conditioning for a couple of hours, so the heat is extra hot. And humid. But I like that.

I arrive and get buzzed up. I take the lift. It reminds me of New York – the cage lifts with double doors. Up four floors and there’s a gate and another door, all with locks. I’m greeted by Alessia, who has a bright shine to her and cornrow dreads that tells me she’s one of the tribe. We get along easily and before I know it, I’m outside again and she’s showing me the neighborhood as the sun goes down.

“Here’s the Colosseum,” she says, calmly, as if it’s a corner store. Wow. I can’t express the feelings I have when I see these crumbled ruins, massive under floodlights and flashbulbs. We move on and explore. Across Via Cavour is a mellower neighborhood, less of the turisti and more ivy covered buildings and hardly any traffic. This is something that strikes me about Rome. There are these busy streets with Italian traffic and lots of noise, and yet walk a block and the noise disappears and you wouldn’t think you were in the city. The tall buildings deaden the sound waves and you’ve just got people – not even packed! – enjoying the narrow cobbled streets, the trattorie, the bars, or just taking a walk like us. It’s magical and I’ve already fallen in love with Rome in this warm, humid evening.

“Rome is an eternal thought in the mind of God.” So said Laurence Olivier in Stanley Kubrick’s ‘Spartacus’. I coudn’t agree more.

We get back to the flat, and I need a rest. I unpack a little and check email. Yes, there is wi-fi. Not that common on my trip, but here it is. After a rest, I go back out to find something to eat. I return to the Colosseo to take some photos on this bright almost full moon night. The word tells it all. Colosseo. Colossus. Huge.

Rome is a statement. There’s nothing shy about this place. It’s all huge. But not in a sprawling London or LA kind of huge. A historical, flesh and blood, marble and stone, Roman huge. You can feel the power, that at one time it was the capital of the world. The Roman Empire. It’s tangible and somewhat fearsome. I’m in awe again. It’s beautiful.

I end up going to bed around 2am. There’s so much stuff to catch up on, photos to import, blog to write, and generally organizing myself being on the road. It’s a constant job and easy to let slide, so I get it done. Tomorrow’s a big day.

Next day, I’m up around 8am and out for breakfast. I wander around and find a spot for a caffè lungo, otherwise known as an espresso pulled with extra water. Ever since I arrived in Italy, I’ve been drinking full strength coffee Italian style. It’s wonderful and I still hear my friends laughing at such a decaf zombie such as myself going all the way.

It’s so easy to get lost in Rome and this happens to me frequently during my stay. Even with the iPhone, I’m not always sure. The streets are fairly haphazard. There’s no city wall to reference like Lucca, the side streets don’t always connect to where you think they should, and I walk in very large circles a number of times. My feet hurt, but what the heck – deal with it. This is Rome!

I check out the Piazza Venezia. Again, it’s freakin’ massive and it looks like it was part of the Empire, but in fact it was only built around 100 years ago. It’s raining. The marble steps are slick and I’m sliding a little. But Rome in the rain is very pleasurable. It’s warm rain and I’m only wearing a tee shirt and shorts. There’s a lot of turisti here and I climb the steps and into the museum. It’s grand, of course. There’s a lot to see, but I prefer being outside. I go up to the upper level to see the Rome skyline. Wow.

Coming back down I hit the streets and look for lunch. The rain lets up and hot sun wins over. Where to now? I wander towards the Jewish ghetto, which, according to Alessia, has been kept mostly intact as it was during the Second World War. I get lost and find myself back where I started a few times, but that is part and parcel of being in Rome, even with an iPhone.

The ghetto has an eerie feel about it. You can sense the darkness, the times not that long ago when Mussolini’s blackshirts came in and ousted the innocents to their fate. It’s not an easy feeling being here. But people are eating on the streets, there is life to be found. I end up at the Portico di Ottavia on the outskirts of the ghetto and am reminded that I’m still in ancient Rome. It’s another example of how this city is a mixture of old and new. It’s a complex place full of passion and history like no other.

I check the Maps app and find my next direction: the Pantheon. I end up coming up the side of the building and not quite realizing where I am. It’s only when I see the fountain in the piazza and turn around, I take in the columned portico and grasp the presence of the place. It’s awesome, of course. I immediately go in and am stunned by the scope of it’s concept and the movement of the eyes upwards to the oculus in the center of the cupola. Rain or shine, there’s no sliding door to cover up the opening. It sheds it’s perfect light onto the floor. The rotunda echoes the voices of the crowd, and every so often, a louder voice requests us in five languages to stop talking. There is a sudden diminuendo and then a slow crescendo rising to the normal chatter of the crowd.

I walk the inner circumference of the Pantheon, the temple of the gods, with a humbled sense of worship.

Exiting into day, I adjust to the sunlight and walk into the piazza. It’s a hot one and I need water and nourishment, fast. I end up at a small pizzeria for a slice with caffè and acqua. I’ve arranged to meet Alessia here, so I walk back to the Pantheon and there she is on her bike looking for me.

We decide on gelato, and she knows just the place. Hitching her bike to a railing, we walk to the oldest gelateria in Rome. There are 150 flavors. Excuse me? That’s 3 months of one flavor every day. Okay, a month an a half if you have a double scoop. But still! A-hundred-and-fifty flavors? WTF? Of course, we go in. This place is ice cream heaven. She opts for Opera, a hazelnut flavor with pieces of other nuts inside, and Cioccolato Nero. Nuff said. I go for Opera and Zabaglione – any flavor with that suffix in a name is going to taste good to me. Next time I’ll have chocolate as well. I’ll stop there.

The gelato is melting down the cone and all over my fingers as I try and eat it in the heat of a hot Rome street. Alessia takes photos of me to show my granddaughter. Great idea.

Continuing on, we end up at Piazza Navona, wherein lies the famed Bernini fountain, La Fontana dei Quattro Fiumi, that is both elegant and sexy, in a Roman kind of way. It’s a pagan tribute to water gods and pan-like figures. There’s a horse under the central rock piece that’s somehow part of the whole story. These fontane are stories in stone. A bit of research will uncover the whole tale of Bernini’s intent. I just wish I had visited at night, which is when the statues really come alive.

Alessia goes onto her next appointment and I take a walk back to her apartment for a rest. I’ve been on my feet all day. One nap later I get up and head out again, this time for the infamous Trevi Fountain, immortalized in Fellini’s ‘La Dolce Vita’. The walk is longer than I thought, but I’m enjoying every minute, every step in this fabled city. I can feel myself expand. It’s almost a full moon and I round a corner and hear the noise. The throng of visitors coupled with the flowing water makes an enticing, expectant music. I am spellbound by the majesty of what is before me. The fountain is huge, Rome huge, of course, and everyone there is in some sense of happiness. The whole vibe is one of celebration. I want to jump in, but there are two carabinieri watching from the side. Wearing wet clothes all the way home would not be easy, but what the hell, the fantasy makes it worthwhile. I throw a couple of coins in instead, and then see an old man fishing them out. Apparently, the city employs him to reap the rewards of all the tourists and their desire for good luck. I’d prefer if the money went to him and not the city.

I’m soaking up the scene, la Fontana di Trevi under the full moon. I feel so blessed and don’t want to leave, but my stomach calls. I walk closeby and find a pizzeria, where I sit down for dinner. Pizza di Trevi. It was mediocre, not as good as I expect from Rome. But still, I am in Rome and a stone’s throw from Trevi fountain. I’m not complaining.

Back at the apartment, I connect with Alessia again. We all stay up late chatting about life. I’m blown away by how open and available she is. Another sign of how the Universe keeps delivering, manifesting wonderful people throughout my trip. I feel blessed to know her. She’s an angel.

These original posts have been edited and expanded for the book series, ‘Soul Traveler’.

Navyo grew up to 6 foot 5 in England, studied music in London before traveling to Pune to meet Osho in 1979. He has been the co-ordinator of the music department in Pune Two for several years and has participated in a number of CDs of Music from the World of Osho. After a decade or so in California, he now travels the world housesitting in wonderful locations, working as a graphic designer by day and writer by night. facebook.com/navyoericsen – conscioushousesitting.com

A Door Into the Vastness Within

A bucketlist for two

Magical encounters on Indian trains and buses: Manali to Delhi